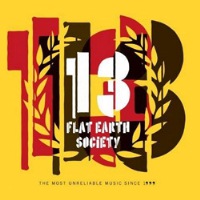 Not only is this NOT your father’s big band, but this is for avant big band and beyond fans.  In fact, you can listen to it, allow it to cuddle you, nudge you, kick you, engulf your mind and sweep your feet from you like a tsunami wave.

Thirteen compositions (all original except two – “Intersections” by Tom Dissevelt and “Stoptime Rag” by Scott Joplin) and FES’s 13th album, this both swings and darts about in all directions, like a box of accidentally ignited sky rockets.  One listen won’t save you but might raise you from your hopeless grimace as to our crumbling world.  If anything is worth listening to, THIS IS.!!!

A push and pull of music, dragging you deep into their secret world then birthing you back up into orbit.  Vaudeville inspired moments, high energy, RIO style, near train wrecks, circus-like excursions, avalanche  big band charts, lonesome minutes of silent theatre comedy, sparks of anybody’s guess and pioneering arrangements on the edge of insanity.  All so wonderfully odd!!! Sometimes film noir soundtrack, (track 8) “Intersections”, a Twilight Zone of many episodes!!  For fans of FES, X-Legged Sally, ragtime, RIO, and crazy great big band in general.