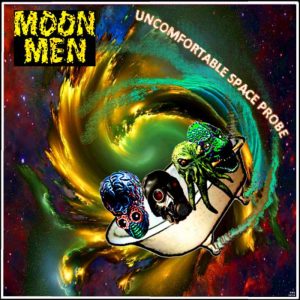 First release (‘Amazing Science Fiction Stories’) was a limited-edition run of 300 silver-backed compact discs in a special 6-panel cover. Art and story (in comicc book form) by Bret Hart, as is their 2nd one presented here. Featuring the same four members, Bret Hart: guitars, percussion, field recordings, Casio SK5, devices and signal-processing/ Jerry King: basses, guitars, brass/ Bill Jungwirth: batterie/  and Dave Newhouse: reeds and keys. That is the deciphered version from Admiral Eschaton Crater: guitars, commentary on Fook’s snoring/Cthulhu Moone: bass, guitar, bell, gong/ Billzilla: drumming and percussion/ and Major Dom Fook: reeds, keyboards, snoring. Each of these artists have their own projects and the one most may be familiar with is Dave Newhouse of The Muffins, and Manna/Mirage. Bret Hart is the founder, artist and organizer of Moon Men, along with his own solo work and other activities. Jerry King has several projects such as Cloud Over Jupiter, solos, and an album with former Blue Oyster Cult member John Shirley. I regret not knowing more about the others, but in time I am sure to learn more.

Whereas their first was mainly improvised compositions in an all you can eat buffet of styles, ‘Uncomfortable Space Probe’ includes 13 tracks/50 minutes (3 more bonus tracks on the download version- raspberry!) of precomposed riffs mostly by individual band members, that were then sent to fellow members to add their own parts. The overall result is similar in the same blueprint as their debut, meaning plenty of progressive genres that pervaded the 1970s scene of international music inventions, ranging from RIO, esoteric  soundtracks, space jams, funky jazz rock, touches of avant quirkiness, free jazz, and a liberal dose nod to classic Krautrock. Tidbits to tanks full of Heldon, VDGG, King Crimson, Rob Mounsey + Flying Monkey Orchestra, Sun Ra Arkestra, however the emphasis leans more to the free jazz and loose canon approach that results in even more of an experimental sound this time. For instance ‘Dark They Were and Golden-Eyed’ (track 1, the only tune specifically by Newhouse) brings on the hybrid space zeuhl with early pre Canterbury like Uriel/Arzachel minus the vocals (Dave Stewart and Steve Hillage fame). ‘Billzilla 94’ (track 6, by Jungwirth) is a syncopated mechanical jazz exploration not too far from something Zappa might have thrown in. ‘Kai Ching Tai Ching’ (track 10, by King) has a cool chug along jazz feel, with a very nice about face change that moves into a quicker exotic fused danceable delight. You just have to have fondness for the shift. ‘Antimatter Handshake’ (track 5, by Hart) has a sweet demented Lars Hollmer/Zamla style that fans of that brilliant troupe will love.  ‘Mechanical Dog’ (track 7, by Hart) brings back some of the swamp blues of the debut album, but always with a bit of craziness and good moonshine drinking music (Moon Men don’t leave out the fun stuff). ‘MM1 – A.S.F.S. – Reprise’ (track 13, by entire band) is what it says, a reprise from the first Moon Men ‘Amazing Science Fiction Stories’ and it certainly does take off and stay in the inky black universe somewhere out there.

It is safe to say this sophomore release is a bit more of a patchwork than the first, but not in a bad way. Looser, more fun, a little something for everyone in the progressive music world, and some moments of cosmos travel, backwoods bayou, jazz soaked creations, and avant garde fruition. The physical package is worth owning with the detailed art by Bret Hart, especially if you like comic book art, which he has an excellent knack for. Again, there is a story line but you will have to dig a bit to find out about it. The music is an adventure on its own, and who knows what the third release will bring? But it is coming. Enjoy!