The Tempting and Haunting VOODOO RAYS 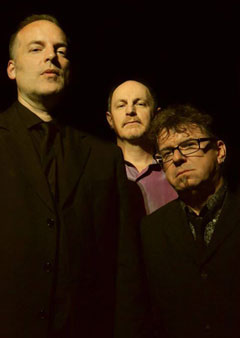 Voodoo Rays! The tempting Voodoo Rays swings your soul amid their powerful bass lines and haunting atmosphere; while the UK accent in vocals adds a mystifying dimension. Here we go for Voodoo Rays, London:

Welcome to Art Rockin’ Magazine! Who are these 3 sources of the rays of Voodoo Rays? Unveil!
Francis Elliott: Voice and guitar, Londoner. I spent 10 years as a conceptual artist before deciding that I needed to put down the paintbrush and stand in front of a large amp playing feedback for a few hours. That single decision 5 years ago has led to 5 albums, gigs across the country, radio play and a small amount of tinnitus. No regrets!!!
Andy Symes: bass player from London now living in Brighton. Been playing in various bands since the end of the 80s -Free State Prophets, Pointies, Ratchet- to name but a few. Love playing live.
Graham Hadley: I’m Canadian, and I’ve been playing drums since an early encounter with an AmDram Panto drummer. With jazz and rock experience, and fusion and prog aspirations, I was easily drawn into Voodoo Ray’s musical adventure.

You seem pretty original. But who you regard as your influences?
F: I’m influenced by everything I hear. The sound of a stick on a metal fence: the rhythm of train tracks at speed: my own voice attempting to mimic bass lines whilst walking in the rain. Main guitar-based influences on the band in the past have included Radiohead, Straitjacket Fits and Sonic Youth, but I’m just as likely to listen to Janacek or Sun Ra as rock music. Current musical obsession is Spirit of Eden by Talk Talk, but it’s too early to say what effect it might have on the next record. Certainly a move toward greater abstraction. Each record seems like a stepping stone to the next one. I guess in the end the biggest influence is what we did last, and what we think was wrong with it. As you might imagine, this changes daily.
A: Early pink floyd, sonic youth, The clash, the cure and many more
G: My drumming heroes include Ian Paice, Bill Bruford, Neil Peart, and Gavin Harrison. With 40 years more practice I may start to sound a bit like them too.

To me, music composition is like a prophetic illumination and most artists have no clue who put the sounds in their ears. What do you think of the sources of sounds of Voodoo Rays?
G: Frank is our composer, and he has introduced me to a whole new world of music focused more on sonic texture and psychedelia.
F: Mostly the sound of our rehearsals. A small windowless room in south london: bass on the left with a large stack: drums in the middle: guitar and voice on the right. A lot of time is spent trying to reproduce that sound on record. Low ceilinged: dark blue and green. I aspire toward Rudy Van Gelder’s legendary New Jersey sound, but you know, with a london accent.
A: For me, early synth sounds tracks to Sci-Fi movies.

You say your promotion has mainly been based on word of the mouth. Could you explain more?
G: Facebook is good too 🙂
F: Those that can, pay: those that can’t, speak
A: Well we do all of our promotion which involves a lot of talking to people. And then they tell their friends.

What equipment you use? (Specially the bass!)
F: Fender Jaguar into a Pod XT. Multiple universes at the tap of a toe.
A: an ampeg stv200 with a value pre-amp head and a Zoot 2×15, electro harmonic holy grail, electro harmonic tube zipper, bass is a musician stingray (early ernie ball) and a boss ME50
G: Drums are a hybrid setup. Vintage Ludwig drums and Paiste cymbals. And a Roland SPD SX for triggering all manner of loops, samples, and sounds. It’s very exciting to explore the range of sounds available.

What is your practice routine? How much time the band members spend together?
G: Regular Wednesday nights, come rain, or shine, or moving to Brighton, or living in east or west London. The Pink Usagi studio I co-own, and where we practice, is in Battersea not far from the iconic power station.
F: Every wednesday.
A: Once a week in our studio rehearsing and recording and gigs about 2-3 times a month. How much time the band members spend together? Apart from studio and gigs not as much as we’d like.

Where is your favorite part of the world geographically? What has been its possible influence on your music?
G: I think the Canadian wilderness in northern Ontario is the most enthralling on the planet. But I don’t think the moose or black bear have had much impact on my drumming, other than allowing me to continue it.
F: I like my back garden a lot. Travel seems to be illusory to me. Luckily I find walking the streets of the east end to be endlessly fascinating.
A: The alps in winter. What has been its possible influence on your music? To get big expansive bass sounds 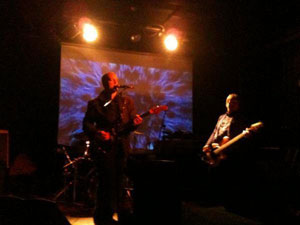 Could you explain your experience on stage?
G: We’re an intense experience. We’re unusual and get a great reaction from other musicians and sound men. People dance to our songs, even the ones in 7/8 and 5/4.
F: We play a bit like an express train: a palpable sense of warming up tied to an undeniable velocity. A threepiece by definition is unstable, and we play more unstable than most. We usually walk on angry, and leave euphoric. On a good night, that is.
A: We come alive on stage especially when frank turns into voodoo frank. We are urgent, insistent, and totally into the sonic vibes

What are your thoughts on mainstream music? Where Voodoo Rays currently stands and what is your perspective?
G: Better ask Frank this question. I’ve got inverted paradiddles to practice.
F: I love mainstream music. Katy Perry? Hell yeah!!! Seems to me that pop is the well that we all drink from. If you don’t like modern pop, you probably don’t like modern life. The rays, however, have no interest in being contemporary. We play at a tangent to modernity. Not so much by choice, more by nature.
A: It seems to be sterile, manufactured, un-original, pap mostly. Where do Voodoo Rays currently stands and what is your perspective? I would say we’re a good 10 miles past the edge and enjoying the unknown.

Where our readers can buy your music?
Bandcamp: https://voodoorays.bandcamp.com/

Where we can see you live?
G: Check our Facebook page for upcoming gigs 🙂 https://www.facebook.com/VoodouRays
F: A small backroom of a london pub sometime soon. Come up afterwards and we’ll buy a round.