War on Women: Sonic Exposition of a Bare Wild Truth 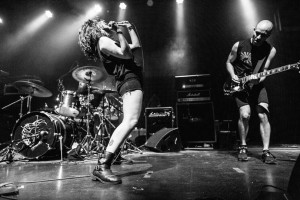 War on Women, contrary to what the name may suggest, is not inflaming a war against women! Rather they are an explosive feminist group seriously devoted to changing pre-justice and bias against gender discrimination. I have a high respect for their music quality that I call “unexpected combination of contradictory elements”. Artistic but harsh, melodic while out of control, colored by tinges of well-composed screams! They have their eponymous debut full-length album ready to explode on Feb 10th 2015.

Welcome to Art Rockin’ Magazine! Could you please introduce War on Women and its members to our readers?
I’m Shawna, the singer, and all that other boring stuff can be found at www.facebook.com/waronwomen

What was the first impulse that led you to decide to talk to society about gender discrimination?
Being discriminated against! I don’t think I could help talking about it if I tried, because I keep experiencing it, you know? It’s a part of my life and the life of most people I know, so it was very important to me to put the issue first.

Which comes first to you personally: activism or music?
I would like to think that in this band, they are entwined. But it can all be hard work, so I try to listen when my body tells me to do one or the other.

Shawna! I am just in love with your screaming vocal chords! Hitting on the right notes while screaming in a melody at the middle of How’s Tricks track?! How you trained your scream to such accuracy?
That’s very sweet, thank you! I don’t know. I was a singer first, then I learned to really scream once I allowed myself to get righteously angry. I like to do both!

Regarding all kinds of gender identities discerned yet and even getting popularized by facebook, do you see a chance that in future dualistic view on gender becomes transcended? If this happens, do you think we will still live in a dual gender world?
I love the idea of gender anarchy, and that our genitals do not define who we are or what we do. But, it sure could get confusing if everyone I know had a different preferred pronoun! Hopefully we’ll strike a balance, but for now the most important thing is for gender-non-conforming people to be heard, respected, and given full equal treatment under the law, free from harassment and violence.

How is your composition process? Do you compose music based on the lyrics atmosphere or the music comes first?
We sort of write them both separately, and then match them up. Well, sometimes. Other times, I say “I want to write a song about abortion, have anything that would work with that?” and we go from there! It’s quite fun, really.

What are your musical influences?
Too many.

What was the last book you read and how it may have influenced your work?
I just finished “The History of White People” and it was really amazing. Maybe even too academic for me, it was so thorough. It basically just lays out how the concept of race, and of whiteness (here in America, at least) came to be, and in so doing really proves how silly it is to judge others based on skin color.

What is your practice routine? How much time the band members spend together?
Not enough.

What I see in your music is your true and uncensored soul. You just don’t hesitate and surrender, but confront and take action! In your own opinion how close you are now to your true/ideal soul?
I love your description. It’s really humbling and I hope it’s true. While I wouldn’t use the word “soul”, I do try and become a fully actualized and self-aware person, in every facet of my life. One great decision I made, and it was a decision, was that I would not care what anyone thought of me while I was on stage in this band. It’s really freeing.

Where we can see you live?
You can see us live mostly in the USA, but we hope to get overseas sometime soon. Tell all your favorite bands to bring us over there!

Thanks for your time! Please feel free to share anything more to our readers.
No, thank you! Great questions!