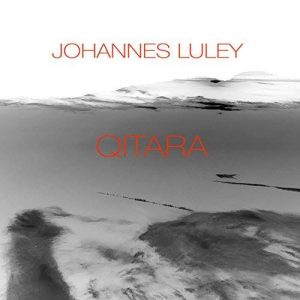 Presented to you is a 11 song (47+ minutes) 2017 solo that is mixed, mastered, produced, and composed (with exception to trk 7 ‘Red and Orange’ by Jan Hammer, and trk 8 ‘Faces in Reflection’ by George Duke) by masterful guitarist Johannes Luley. With a fairly long career beginning with the electronic synth-pop outfit Few Boys (they only released a single ‘Secret Times’ 1985) he quickly made his way to a far more progressive rock world with two bands (Moth Vellum and Perfect Beings). He also has a previous solo ‘Tales From Sheepfather’s Grove’, but all former projects are different than his newest adventure ‘Qitara’. This one is much more jazz fusion and was recorded over some years, while Johannes took a break from his band Perfect Beings. As the title suggests, the emphasis is on guitars, and the listener is in for an exhibition of tones, atmospheres, emotions, and various timbre, not to mention exemplary performances by all musicians involved. It may surprise some that Johannes studied guitar as a teenager with the great Eddy Marron, who was guitarist for the fantastic and under exposed German avant space jazz band Dyzan (also Giger/Lenz/Marron, plus guest appearances and one solo). What a way to get your musical roots started.

The music kicks off with a high spirited jazz rock piece that sounds like a fusion of Terje Rypdal. Among the compositions, the lead guitar work will invoke Pat Metheny, John Abercrombie, Steve Hillage/Christian Boulé, calling up both the celestial Clearlight Symphony and Gong (at their more jazz fusion moments), and a cool nod to Canterbury, sometimes all in one composition. There is even a spot where I swear I heard David Torn making a daring plunge. Acoustic guitar and piano begin one piece with vocals added after the intro, much to a soothing effect. The music keeps a spacious and at times an eastern vibe, which is highly alluring. Spare vocals are not at all a detraction, but a plus, due to perfectly tasteful use. The amount of varied textures Johannes uses with each work is amazing. From clean taut riffs to glissando, and on occasion, assertive distorted lead lines, his use of different brands and models of guitars, truly molds the music. ‘Moonlight Mess’ (trk 6) which includes a part in 15/4, has a salute to Allan Holdsworth. It is actually a reworking from Moth Vellum. Extensive notes are included for each song in the booklet with the CD, so rather than do an eight page review, I refer all interested parties to that.

After listening to the disc I was exhausted. The contents cook but pause, reflect, sail, soar, bathe, splash, dart, drive and curl around telephone poles. If you appreciate an expansive jazz fusion album that has all the classic sounds (even if just moments at a time), plus arranges the compositions like an adventuresome one day fiesta, then this one if for you. This is clearly among the finest fusion recordings of 2017. RECOMMENDED.