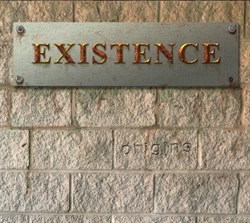 Led by Alan Charles, this is a double CD that is the result of the debut release of the band not being able to properly complete their intended project from 1992. The composing of material actually began in 1987. Remakes of songs from that single disc version, with additions for the two disc set, brings Existence to the most accomplished and refined they have ever sounded. While in the progressive genre, it has a strong traditional folk presence at the beginning, with plenty of violin and rock energy. It is what I would classify as progressive folk rock, with fusion of theatre, ballad rock and even classical. The recording is a concept work and the vocals/lyrics tell a story throughout the compositions. The two sides are divided into two subtitles, CD 1: Fragile Whisperings Of Innocence (which has 7 songs) and CD 2: Silent Screams In Violence (which has 6 songs).

At different points in ‘Origins’, I am reminded of certain groups. As references, these include the more soft ballad tunes of early Saga (example track 4 ‘Living For You’ and track 5 ‘Autumn Brain’). I am also sure some will hear a touch of Kansas due to the violin being often used as the lead and the sometimes hushed vocals. The first side ends (‘Last Dance With Happiness’) with female vocals which has a dramatic/stage presentation to it, ending with lush mellotron. The music would be a joy to hear in a theater or medium sized cozy venue where the balance of intimate and the emotional content can be appreciated.

Side two begins with ‘The Pawn’, which again reminds of Saga, especially the vocals. The piece builds towards the end with a soaring reprise. The following track ‘Aftermath’ is all instrumental and very enjoyable with a Celtic drive and gist. Most of the content on the album has a nice variation of elegant to dashing, then back to subtle. The dynamics are outstanding. ‘Seasons, The Theme part III’ has the only acoustic guitar intro along with waves on a beach, children playing, and then as quick as that, it is over. The last song ‘This One’s For You’ has the most upbeat and happy feel, with a slight departure from the other stylings, but still retains the formula of the excellent changes and textures of a fine multiple stage composition.