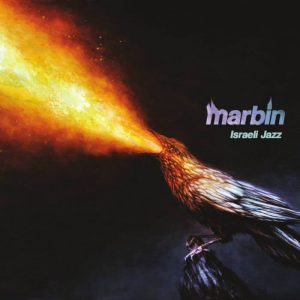 Great new fusion release from band presently based in Chicago. In 2007, Marbin was founded by saxophonist Danny Markovitch and guitarist Dani Rabin who were at the time, living in Israel (where they were born). As fate would have it, they joined a band founded by Paul Wertico (well known as a member of Pat Metheny’s group). The result of this was a recording with Steve Rodby (bassist also a former member of Pat Metheny group) called ‘Breaking the Cycle’ on Leonardo’s MoonJune label in 2011. A few releases later (all on MoonJune) Marbin have a fine all instrumental jazz fusion recording here called ‘Israeli Jazz’ (2018), featuring members Dani Rabin (guitar), Danny Markovitch (sax), Blake Jiracek (drums), and Jon Nadel (bass). The same lineup was used on their ‘Goatman and the House of the Dead’ (2016).

Starting off with a solid happy drum beat, quickly leading to a traditional Jewish sax solo, ‘Israeli Jazz’ reveals precisely what this project is all about. Adding an immaculate lead guitar solo, ‘The Old Ways’ (track 1) has undeniable charm and gusto. Marbin have always had the talent to be playful, daring, acrobatic, and sentimental all in one song. They do not disappoint here.

Dani Rabin brings home a great deal of fiery and precise guitar work that constantly reminds one of Allan Holdsworth with a touch of Eddie Van Halen. The hybrid of combining traditional Jewish bars and creative jazz fusion is quite unique and highly listenable. First time audiences will be impressed. Longtime fans will be thrilled. All four musicians are at the top of their game. All compositions are extended cuts and develop wonderfully. Nothing is wasted. ‘Arkansas Jumper’ (track 3) is a butt kicker, with everything a jazz fusion lover could want (even some Dixie Dregs style tour de force). That song is about as far off the hybrid they go. A slow bluesy tune such as ‘Pirate Punch’ (track 5) give balance of moods to the project, however, the emotional and forceful feel remains at fever pitch throughout the seven songs.

Be prepared to enjoy plenty of tight twists, spirited changes and a creative mind frame that is nonstop. The title track ‘Israeli Jazz’ ends the recording and it is a doozie. A hot driving clinically clean performed gem, with all the stops pulled out. On this release, the formula is superb. Not a dull second on the disc. First rate all the way.