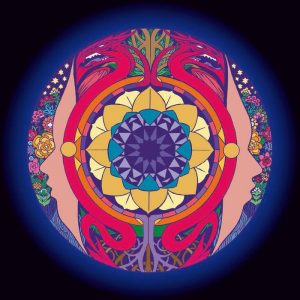 The first downbeat of this complex multi instrumental solo release by Charlie Cawood latches on to you, and you know it is special. Filled with vivid eastern fused world music, exotic melodies galore, and colors you can hardly imagine. Charlie is known for his work in Knifeworld (bassist), Mediaeval Babes (instrumentalist, arranger), and My Tricksy Spirit (stringed instruments), however none of his previous or present roles will prepare the listener for this ultra-beautiful lotus blossoming of his debut album.

The number of musicians and instruments alone make your imagination flutter but the recording is mostly soft melodic passages, with tranquil pieces, some pulsing with lively sway and travel. Bits and parts sound like Oregon, a more exotic Penguin Cafe Orchestra, and eastern minimalism, yet never right in the exact isle of any. Far too elaborate and layered to really fit any such category, but a net of all the above, plus a fantasy combo of Stephan Micus (who Charlie has much in common with), mid period Georg Deuter, Philip Glass, Ryuichi Sakamoto (especially from era of ‘Merry Christmas Mr Lawrence’), and definite Canterbury essence.

Although many of the tracks range from one to three minutes, and only a few go over six minutes, there are sets of songs, neatly divided into movements, which bring vivid selections of images, atmospheres. and dynamics. The flow and action stays fresh. As a whole, it is wondrous. Every listen is full of new discoveries. Brilliantly managed writing skill encompasses early music, classical modes, minimalism, rich oriental structures, and styles which ebb and flow, often missed by the ear first time around. ‘The Divine Abstract’ is simply a display of astonishing craft and great taste, with a bonus in invention. Up on a pedestal, this is a contender for 2017’s best progressive recording. EXTREMELY RECOMMENDED.