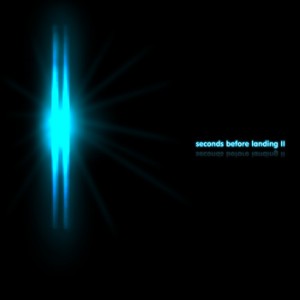 Enter Seconds Before Landing featuring composer John Crispino who just released his  latest and greatest CD “”Seconds Before Landing 2” Crispino surrounded himself with some of the finest musicians on the planet, including Gunn, and also John Palumbo from progressive rock group Crack The Sky…Also appearing, are his core group of musicians, J.D Garrison on bass, Steve Schuffert on lead guitar, Maurice Witkowski on acoustic guitar, and Jamie Peck on piano and horns and with Vanessa Campagna & Carrie Marie Jackson on backing vocals. S.B.L. 2 is once again be mastered by 2 time Grammy nominee, and Pink Floyd engineer Andy Jackson. On the upside, you can expect 11 semi-exceptional songs that champion a high intensity sound against the raw sounding backdrop of almost a “kick-ass” theatrical sound. With “Seconds Before Landing 2” expect spot-on Progressive  Rock that is Electronic but hard nonetheless. It’s sure to inspire and gravitate many deranged listeners out there.

I must admit I’m not a big fan of this style of music, however the arrangements on the musical side are pretty exotic in their own right. Ninety seconds into the first track “Big Train” two of the first things crossing your mind is: 1) How undeniably truthful and dark  music sounds, and 2) why the heck haven’t I heard of Seconds Before Landing before? The CD was not what I expected, but let’s not get to ahead of ourselves here. Track 1 “Big Train” is an invigorating lead off statement and hands you off to Track 2 “Hey Dad.” These were 2 superb openers and they get things off the ground nicely. Track 3 “Al Shaitan” is another intriguing anthem. “Etiene” really showcases the writings style of Crispino while “Don’t want to Feel this way” is an intellectual affirmation that just seems to go stay with you long after the song is over. While rocking “The Great Deceiver” delivers more heartfelt rock balladry and a skewed lyrics and melodic vocal ability. The CD as a whole does a nice job at offering a wide variety of media; some slow, some rocking, some synth posturing, some very dark and a few rather epic. In fact everything about this album is epic. “Go Big or Go Home” is one saying that comes to ming and Crispino has elected to “Go Big.” All tracks are passionate, while some are even dark and foreboding with undeniable raw truth, but hey don’t kill the messenger! Crispino  has a lot of vocal appeal. Why does he keep reminding me of Al Jourgensen (Ministry)? 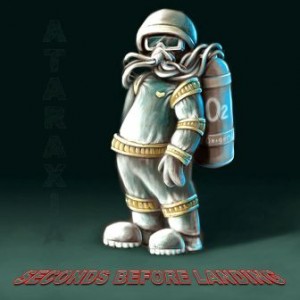 Crispino’s musical style flows and ebbs well with bursting intensity then quickly withdraws again into reclusive submission. I found this to be a very cool trait of Seconds Before Landing. “Just Breathe” and “Enoch” are 2 more standout tracks for me that couples inspirational subject matter, and lyrics for today’s thinking fan. Taking all of this into consideration you begin to understand why Crispino is doing what he’s doing. The lyrics are powerful and full of intrigue, passion, and wisdom. I can also hear a bit of Camel and Airbag, Smile Empty Soul, Crossfade even Saliva.