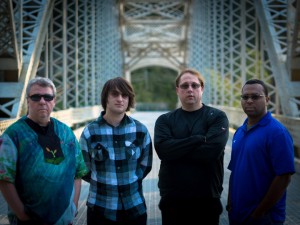 Steam Theory’s eaalbum contains astonishing wide ranges of music influences you wouldn’t believe; and the result is a mysterious atmosphere! The album is due release in Jan 19th 2015. Today Steam Theory is our guest at Art Rockin’ Magazine. Be sure you check out their music at www.steamtheory.com

Welcome to Art Rockin’ Magazine! Could you please introduce Steam Theory and its members for to readers?
Thanks for speaking with me! Steam Theory is a two fold entity. One aspect is the studio recordings, and the other is the Steam Theory Band. For the recordings its myself working on the material and then occasionally bringing in guest musicians for certain songs. The ST Band then does versions of much of this recorded material (as well as yet to be recorded pieces). The band is myself on Guitar/Guitar Synth/Keyboards, Michael Esposito on Guitar and Guitar Synth, Keith Misemer on Bass and Pedals, and Roger Stewart on Drums. The ST Band versions of the songs usually differ from the albums, as we let the compositions take on their own identity to suit the strengths of the players.

What does the band’s name, Steam Theory imply?
It’s not really a reference to anything in particular. I’m a fan of early ‘steampunk’/sci-fi writings, such as works from Michael Moorcock (hence the song ‘Corum’ on the Enduring Delirium album), so that probably contributed.

Regarding the astonishingly wide musical genres incorporated in Asunder album, how extensive your musical influences are?
My mother was a member of the Baltimore Symphony Chorus, so I was exposed to a fair amount of Classical music early on. I love Prokofiev, Mussorgsky, and Stravinski. I was introduced to quite a bit of classic and prog rock from my brother, especially Yes. Hearing Yessongs was a big moment. Genesis, Chick Corea/RTF, King Crimson, Rush, and John Mclaughlin/Mahavishnu were big influences. I really admire McLaughlin for his versatility. From his work with Miles Davis, to Mahavishnu (especially ‘Apocalypse’), to Shakti, and to his Trio work, its all pretty incredible. Hearing Shakti lead me to check out Indian Classical music in college. That lead to studying African music and drumming. There is so much amazing music out there. I find music that crosses genre boundaries the most interesting!

Progressive musicians usually inspire from wide variety of art fields. In your case do you also find inspiration in literature, visual arts, etc?
Certainly visual arts. I am amazed by quite a bit of photography. I love going hiking and backpacking, and find that experience to be pretty inspiring. The natural world has so much beauty, but I think we become separated from it in our daily lives and used to our artificial surroundings. So going out into different natural environments, especially if it takes you out of your comfort zone, can be pretty fulfilling. I enjoy reading science fiction and fantasy. A lot of my music is what I imagine when reading, a sort of personal soundtrack.

I guess the production of Asunder should have been complicated? Could you please explain about the process?
The recording was done in my home studio, completely ‘In the Box/Direct’ (no amps, midi triggered drums) with the exception of micing some acoustic guitars. Some of the songs I have been tinkering with in different forms since the early 2000’s (Intar, Fireflies, and Adrift), others were written very recently (Asunder and Saga). For all the orchestral parts I played them either on keyboard or midi guitar.

I am very interested in technologies that open up new sounds and capabilities to guitarists. I’ve spent way too much time tinkering with guitar gadgets (and I tend to love tinkering with songs as well, dragging out production!). But recently the available technology has improved dramatically, to such an extent wherein a midi guitarist doesn’t need to play with the degree of precision that was required in the past (when you would get all kinds of extraneous notes – or the converter couldn’t properly track lower pitched notes). Now, you also have technology from some companies that can convert polyphonic recordings into midi. I think this is an amazing tool for guitarists compositionally as applied to arranging other instrumentation. Some of the doubling of guitar parts by string sections was accomplished via this method.

From a guitar perspective, I used different alternate tunings throughout. Adrift, Augments, Spectres, Intar and Saga are in DADGAD. Asunder and Stentorian are in a BbFDFBbF tuning. When playing this live I use a James Tyler Variax, as it allows me to change tunings between songs by turning a knob. I use a fretless guitar and an E-bow on the last song, Rejoinder.

Do you have a special approach in choosing concepts behind your albums? How it has been for Asunder in particular?
I go through phases where I am interested in different styles of songs and genres, so I have quite a bit of different material in production. Some of this material is more prog influenced, some fusion, some jazz, etc. Putting the albums together I try and match up material that is somewhat related, but still keep it eclectic enough so that someone listening to the album will be surprised and interested.

Like you, I am a serious fan of instrumental progressive rock music but the musicians and fans of instrumental music in this genre not numerous. Could you please explain about choosing the instrumental path in prog music?
I think that early on, I was drawn to it as the complexity of the music was interesting to me. When I was starting out on bass guitar I was very interested in technical/chops oriented playing. I was drawn to guys like Stanley Clarke, Victor Wooten, Jaco, Chris Squire, Joe Satriani, Steve Vai, Mark King, Steve Morse, Steve Howe, etc. These guys were all doing really different stuff and pushing the boundaries of their instruments. My motivation was not to make/play music for as many people as possible, but rather focus on making music I enjoy hearing. That said, I’m not particularly anti-vocals, I think I would enjoy doing some vocal music in the future.

What is the band’s practice routine? How much time the band members spend together?
We get together once a week, usually for 2 to 3 hours. Sometimes we do sectionals when we are learning new material.

Could you please explain the local scene of progressive rock in Baltimore, Maryland?
There are some really good Prog bands in the area, but not a whole lot of venues that cater to prog. Orion studios has a Prog showcase that features some great acts. There was also a Washington D.C. based Art Rock group called D.C. SOAR which featured prog groups, but they are not as active as in the past. There is a very vibrant jazz scene, with some amazing players here. Just not much for prog.

What are your thoughts on mainstream music? Why do you think instrumental progressive rock is not today’s mainstream music? Do you think it could become one day?
I think there is a tremendous amount of talent in mainstream music, but it usually doesn’t interest me a great deal in terms of musicality. From a production standpoint certainly, but not so much harmonically. As for why instrumental progressive rock isn’t more popular, I think that its easy for people to relate to vocals, and in most cases makes it much easier for someone to sing along to a catchy vocal hook. Its the whole Folk Music vs. Art Music continuum. I think Progressive Rock and Fusion require more of an investment from the listener. For many people, thats not what they are looking to do when putting on a song. I hope it changes.

Where our readers can buy your music?
http://www.cdbaby.com/Artist/SteamTheory is one place. iTunes, Bandcamp, Amazon, Spotify, Google Music as well.
There are links right on http://www.SteamTheory.net

Where we can see you live?
Currently booking for this Spring/Summer. We will be playing around D.C. and Baltimore, and hopefully some Prog festivals.

Thanks for your time! Please feel free to share anything more to our readers.
Thanks for checking out the music!