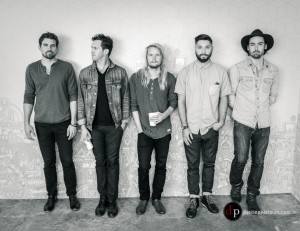 For many musicians, actors and artists of of all sorts, every goal begins with a dream!  Dreams, often, lead you to make big decisions, such as, relocating to a totally different place you perhaps never even thought of calling home.  Grizfolk’s birth started just like that!  Adam Roth, lead vocalist and guitarist, relocated from his native Florida to Los Angeles in pursuit of a career in music.  He would later meet Swedish natives, Fredrik Eriksson, lead guitarist, and Sebastian Fritze, keyboardist and back up-vocalist.  Together they formed a band that made good use of Roth’s love of Americana along with Eriksson and Fritze’s electronic pop savvy.  The band would later expand to a quintet by adding members Billy Delia on drums and Brendan Willing James on bass and back-up vocals.   Grizfolk would see their first break with the song “Vagabonds,” which received airplay in Los Angeles after being released on a digital-only EP called Indian Summer.  Shortly after the success of “Vagabond,” Virgin Records signed the band and released their single “The Struggle” in 2013 which appears in their EP, From the Spark, released in 2014.   Another career boost for Grizfolk came along when their single “Way Back When” was used as part of the soundtrack for the hit animated film Mr. Peabody and Sherman.  Now, Grizfolk has delivered their debut album, Waking Up the Giants, in January of 2016 along with their latest single “Troublemaker” and have been hitting the road headlining on their “Troublemaker Tour” to promote their album.  During their stop in New York City, I caught up with the band to discussed Troublemaker, the band’s name origins, tour pranks, among other things.

When the interview first started, I was joined by three members of the band, Sebastian, Brendan and Fredrik.  While sitting together, Sebastian explained about the band coming together about four years ago.  He also discussed the origin of the name Grizfolk, “…comes from a nickname that we have for Adam…he had a beard and we called him ‘Griz-Adams’…and that turned into Grizfolk.”   Brendan, later described the band’s sound as “North meets South” pointing out the background of each band member.  “ It’s just, the beats and (the) kind of production of Swedish roots and then the Americana-country sound of the deep south in America.”

Now, joined by Billy, the interview takes on a lighter tone while the band express their expectations now that they have released the debut album, Waking Up the Giants, Billy says, “I expect us to be the first band to play on the moon.” To which Sebastian adds, “I expect us to be the first band playing on Jupiter.”  After a good laugh, the band gets back to business as we talk about their single “Troublemaker” and the inspiration behind the song, “a cold winter here in New York,” explains Sebastian.  “We were kind of stuck in a basement and it was so cold outside, we were like ‘let’s not go outside, let’s be here’ and we started making this song…so it just like originated from a very, very cold basement here in New York, longing for our loved ones back home in Los Angeles.”  Sebastian also explained who came up with the concept for the music video. “It was a mix of the director who directed the video and us. Our friend, Josh McDermitt from The Walking Dead, is featured in there so we reached out to him and he was kind enough to take a break from his busy schedule and come out to the desert and rock out with us in the Joshua Tree area.”

Since the release of their EP, From the Spark, Grizfolk has been on the road, almost non-stop, for the past year and a half.  Adam, finally joining the interview recalls the craziest thing the band has experienced so far, “dildos on our microphones, for sure the weirdest thing…X-Ambassadors, they put penises on our microphones in Montreal and it was crazy, it was like, we liked it but we didn’t like it…Just kidding, we didn’t like it at all.”  Sebastian added, “they tricked us, they said ‘stay here with us, have a drink before you guys go on-stage’ and little did we know that their techs and their crew were putting fake penises on our instruments and in our microphones stands; walking out and seeing this was a surprise.” “The oldest trick in the book, we fell for it,” said Billy, who admits to pranking X-Ambassadors right back on the same night, “they have a song called Naked, and during the performance of that song we all walked on stage naked.  Just kidding we had our underwear on and we danced around in nothing but our skippies.”

When asked about which cities and venues they would claim as their favorite, the band immediately agreed upon New York City and Radio City Music Hall being at the top of their lists, but also pointed out that all cities are good for different reasons.  Other cities and venues they have performed at include Centre Bell in Montreal, Red Rocks Amphitheatre in Colorado, Air Canada Centre in Toronto.  Among their growing list of venues, Grizfolk also has some late night television experience.  About a year ago, Grizfolk had the pleasure of performing at The Late Show with David Letterman and most recently they performed on Conan.  Since the band used to performing at venues where the audience is at a close proximity to them, I had to ask how they felt about performing for an audience which is so far away, Adam reflected, “it’s really tough. We’ve been in two, like you said, we did Conan and we did Letterman; really tough for us and really hard to remember, we remember preparing for it and then we remember getting off-stage but we don’t really remember like a lot of during, during the shows but, you know, its always a good time but, we have more fun playing for our fans.”  Grizfolk is definitely a band that is attentive to their fans and very thankful for the support that is given to them each day.  In Adam’s word, they are, “really happy that everyone is coming out.” Brendan added a grateful, “we love ya!”

As a final request, I asked the band if they could describe Grizfolk in one word.  All band members huddled up together to talk and agree upon a word. Once the decision was made, the band agreed that the “one word to describe Grizfolk would be gravitational.”  I could not think of a better word myself! Grizfolk’s gravitation has combined pop, folk and electronics into a sound that is all their own.  Their fresh musical vision has also gravitated many fans together from the many different cities they have been able to visit time and time again!

To watch the whole interview, visit: https://youtu.be/gZNkfro-heo
To get more information on Grizfolk, visit: grizfolk.com
To get their debut album, visit: https://itunes.apple.com/us/album/waking-up-the-giants/id1056379824