A second solo by keyboardist for Camel/Fish and guest on many other albums, Mickey Simmonds, presents us with 67:33 minutes of outstanding music he wrote, arranged, produced, played, and sung. His debut solo ‘The Shape of Rain’ , originally released in 1996, was tremendous and unforg 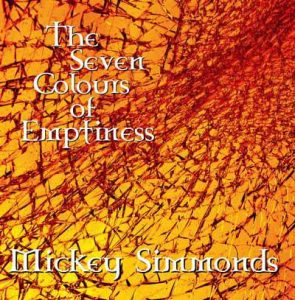 ettable, sending new fans his direction instantly. Several years later his music will call up even more listeners, with this fantastic solo titled ‘The Seven Colours of Emptiness’.

This has not one, but many songs that are worth the price alone. Truly an incredible recording of 15 compositions that range from epic Genesis to grand Enid orchestrations, diversions of Stackridge and more. Mickey does a wonderful job on vocals throughout as well. The intro ‘Trip’ is low-key, reminding me of Mike Rutherford’s ‘Smallcreep’s Day’ in atmosphere with a touch of Pink Floyd. The connected songs move slow but build in exceptional style. Many may feel this sounds like a David Gilmour solo the first few moments but ‘Arriving’ (track 3) moves away from that with classic Simmonds sound, having a beautiful electronic then classical display (which will thrill Tony Banks/Steve Hackett/Rick Wakeman fans). ‘Operating’ (track 4) is grandiose with grand piano and strings. I thought I was listening to James Newton Howard (on his glorious ‘Promised Land’ soundtrack) on ‘Brick’ (track 5) . Very opulent with some punches using drums, high level orchestration, and gorgeous Enid-like soaring guitar lead. Breathtaking!

The music takes you on a trip from calm meadows to tall mountains, to heaven and beyond. ‘News’ (track 6) changes mood with a warm nearly Stackridge folky and jolly piece that is a sweet display of what many dimensions Simmonds shows his audience on this platter. Quickly back to the epic soundtrack and circumstance is ‘Journey’ (track 7) with violin, orchestration, deluxe grand piano, tear jerker ebb and flows, and all the emotional tugging your heart can take. More superb drum punches as good as Kitaro’s The London Symphony Orchestra 2 LP box set of ‘Silk Road Suite’.

So many textures and change of scenery, masterful arrangements, and magnificent thinking, The skills Simmonds has to compose varied styles using different tempos, dynamics, and emotional drawstrings is amazing. He even comes up with what could be classified as a tribal Genesis/Camel sound on the song ‘Feeling’ ( track 9). And with the powerful passages , the music is often brought back down to a pastoral gem of angelic strings or melancholy horn section, and perhaps back again. ‘Kids Send Their Love’ (track 10) has such sweet soothing vocals, and a joyous melody, celebrative but sentimental chorus, it all sends warm shivers down your spine.

From progressive rock, classical, folk, celtic, electronic, plus, ‘The Seven Colours Of Emptiness’ is a grand ride. ‘Time To Go’ (ending track) leaves you speechless. As great as anything Andrew Latimer ever wrote. It will have tears running down your cheeks. Such a angelic, sleepytime, gleaming, precious gemstone that ends with a few seconds of birds chirping…aaaaah sweet dreams. Mickey Simmonds is now one of my top great thinkers of music compositions. This is his highest archievement thus far. FULLY RECOMMENDED.