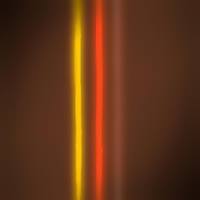 Jason Weekes produces his debut solo with ‘The Third Kind’ under the name Onement9. With a long list of musical influences and education, Jason plays keyboards, drums, bass, electronic tambura, trumpets, tambourine, electric guitar, flute, computer voice, custom maracas, and field recordings. This concept album starts off (‘Good Mornin’ Britain!’) with a very tropical theme, loads of various bird calls, and celestial keyboards with drumkit. It has a meditation feel. The following track (‘Tory Breakfast News’) is very different with tribal drums, roosters, and general chaos. A story line is printed on back of the CD which I’d highly suggest the listener read before, so you can pay attention to the music at hand. You’ll be quick to realize much of this is a politically charged set of compositions.

It is tough to describe this since the pieces have so much variety and each track presents a shift in atmospheres, but these are meant to be out of body musical experiences. What I hear is a mixture of mid 80’s Extreme label artists like Mo Bama and Soma, the first O’rang (exotic fusion from ex Talk Talk members) , Sun Ra, along with the space jam of Gong (‘You’ era) , Orzric Tentacles, and early Jon Hassell. There is a mention of a big Canterbury influence from Jason in his notes but I didn’t detect anything but possible a nod to Phil Miller (Hatfield & the North) or Steve Hillage in one of the lead guitar parts. The fact that Jason is from Canterbury may be the root of things.  Nevertheless, ‘The Third Kind’ is a superlative all instrumental exploratory progressive music release, that holds a fascinating and somewhat alien trunk load of treasure and pleasurable aural delight.