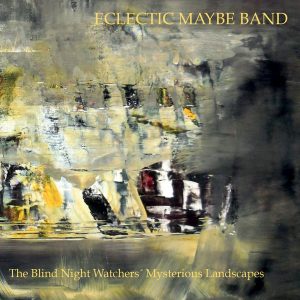 An outerlimits excursion by astro travelers and gifted musicians from several prized members (or former members) of Univers Zero, Pablo’s Eye, The Wrong Object, Morton Fork Gang, and much more. You know this will be special. In short, it is elsewhere and otherwise, in a set of nine improvised compositions that spy on the other side of your brain, cheat the usual adjectives, and defy any musical boundaries. This project was put together by Guy Segers (bass, sampler) who has a resume the size of Europe with bands such as Univers Zero, Present, , Uneven Eleven, Galileo’s Left Wing, and so many more, including even live shows with X-Legged Sally. He made sure he chose musicians who knew at least one other person in the band. Many of the artists had worked together before. For example Morton Fork Gang has Guy Segers and Joe Higham. The remaining members of the band show further collaborations. Dirk Wachtelaer (drums) also played in Galileo’s Left Wing, Vanishing Pictures, Pablo’s Eye, and Moving Tones. Michel Delville (electric guitar) has been a mainstay in Doubt, Machine Mass Trio, and The Wrong Object, and more). Joe Higham (electronics, soprano saxophone, duduk) has played with Combo Belge, and Chris Menten Jazz Van. Roland Binet (flute, tenor sax) has worked with Guy in other projects and also shared the studio with Dirk, Michel, and Catherine Smet (keyboards) in Moving Tones. The credits could go on forever with Guy and company. All interested should check out Guy Segers bandcamp page as it not only has many more songs from Eclectic Maybe Band, not on this CD, but a grand array of music under the “downloadable music” page.

Eclectic Maybe Band came together in one day, under the direction of Guy, and in that day, they simply just started playing on the count of 1-2-3-4. No preplanning of what to play, how to play, or how long to play. It sounds as if much of it was composed, but that is the long experience each of the artists have in musical creation. It is also the smart editing and mixing that Guy did after this eventful day. Guy spent unknown hours, over a period of time, taking the music pieces and sculpting them and giving even more life to them. So he arranged the creations after the fact. The complexity and thought behind all that can never be truly known by anyone except Guy. And then Mr. Pierre Vervloesem (X-Legged Sally, FES, solo, and many wondrous guest spots on a huge list of other artists) put the final icing on the cake, with his fine skill at mastering. The extra nice glossy gatefold digipak features cover painting “Interstellar Space” by Silena Lena. This alone illustrates the music in a visual way.

‘Pluie Étanche’ (track one) swings open the alien blackhole as to invite anyone with a seed of gumption to partake. Fear not, as each piece brings peace and stellar resolve to the soul. Where will the music take you next? The answer is to spectacular regions, other galaxies, and extrinsic zones. With a brilliant balance of sparseness, space, collusion, mind melding, immense experience, and attentive ears to each other’s every nuance, you have a masterpiece of involvement that anyone would be lucky to hear, if you will take the time. ‘The Blind Night Watchers’ Mysterious Landscapes’ is not only the ideal title for the nine compositions presented, but paired with intrepid territory here, it all becomes a beacon for music to come. This was surely what these musicians were deeply wanting to let loose. Exotic spacious free jazz exploration, shades of Lancaster/Lumley ‘Marscape’ , Gong’s ‘Shamal’, helpings of Steve Hillage, ghosts of a more interplanetary Paul Winter Consort, and all this is just a taste of the dimensions that are granted. This is on a very high level. As an old saying goes, great minds think alike. And even if they don’t, often times something unique and transcendent is born.