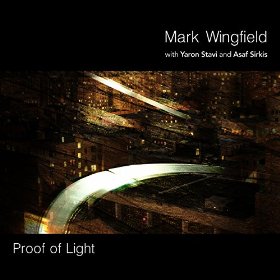 This is wonderful in every way.  A trio with Mark Wingfield – guitars, Yaron Stavi – bass, and Asaf Sirkis on drums, makes its way into the world of elite musical recordings.  For those that have ever dreamed of a hybrid album with the sounds of Terje Rypdal, Eberhard Weber, and Allan Holdsworth (yes those great years of ECM goods and then the pinpoint fingers of Mr. Fusion himself), your dream has come true.

Although this is Wingfield’s sixth solo album, he approached it as if it was his first.  He stopped listening to other guitarists for some time and began listening to a variety of singers, sax, piano, and trumpet players.  This has given him some new takes on his approach.  The process certainly worked.  The entire recording has an open air about it, with tight dancing drums and melodic bass galore.  As with so much of ECM-like jazz, the ideas develop and stream ahead like a clear babbling brook.  Things don’t sit still long and each musician creates both color and pathways, sometimes short sometimes unexpected.  I found the many tones and effects from Mark’s guitar a total pleasure to listen to.  Not only does he have variations going on with the physical action of his fingers on the strings, but also inventive hues that give free range from clean, soft, glissando, sharp, fretless, spacious, and even eastern.

All the more soft ECMish moments sometimes give way to head on fusion with a kick of jazz rock.  The trio shows their capabilities to cook whether it be quick or gradual.  You will love each player equally with nothing but supreme performance from start to finish.  I already loved all that I owned by fantastic drummer Asaf Sirkis.  Now I have two more musicians to add to my list (Mark Wingfield and Yaron Stavi of course).  This gets a very high recommendation from me, as I was glued to every second of the music.  It’s a slam dunk delight.