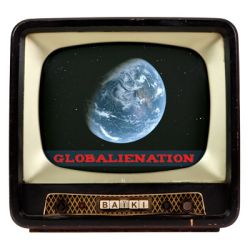 Brilliant Belgian eccentric pop band releases new recording called “Globalienation”. Their early works include “Tosa” (2001) eccentric pop in Nits vein produced by Michal Van Achter (a multi talented musician in his own right), full of dramatic to humorous looks along with very inventive music all around. It’s very delightful and endearing, with a talent for imagery. Philipe Bailley on guitar and vocals (he also reminds me of the brilliant Dutch band Gruppo Sportivo). This is one hundred percent entertaining and done with such ultra-creative composing. The gamut running from fun to sad, from thrilling to hyper, from beautiful to unexpected, is what keeps your ears glued to the music song by song. Don’t be surprised to hear plenty of classical, folk, variations of rock, ballad and many other surprises. To sum “Tosa” up would be whimsical, nearly silly, incredibly great and profound progressive pop beyond the norm to say the least.

Another previous release is “Do It Yourself” (2004) full of quirky pop with many other elements still close to the world of Nits (for reference only) but mucho explorations to please the adventurous music lover. Even more styles include calypso and perhaps an added punk ingredient to show a bit of anger of course but still stay solid in the multi-style eccentric pop so strong in “Tosa”.

Add some crunchy guitar, rock and roll bits, a tad bit more menace, and then some slurring lead and even more pop (ala Midnight Oil) but the creative pop mind frame is still present. Absolutely, Phil is trying for the more commercial pop market, but remnants of his past creep up, while he steps away from his early work, the Johnny come lately sound of an Aussie alt pop sound is only briefly visited. By track 3 (“En Rose”) flakes of his patented sound show then fade again with a swing and smile. Smash your beer mugs together for more! Then in a beautiful unraveling way, the R J Stips (mainly Nits era) influence shows its magnificent face and Phil is back in his most stunning way. Other stand out tunes to enjoy are “Except To Humans” for its pretty balladry , and the last song “Pet Peril” which has a Rupert Hine nod and ends this recording quite nicely. Baiki (Phil) is a gigantic talent in our music world, almost unknown in the USA but you can hear this of carnival pop of adventurous music if you search. Well done!