Out of Naught, True Prog Rock Fluctuates :: A House of Not Interview 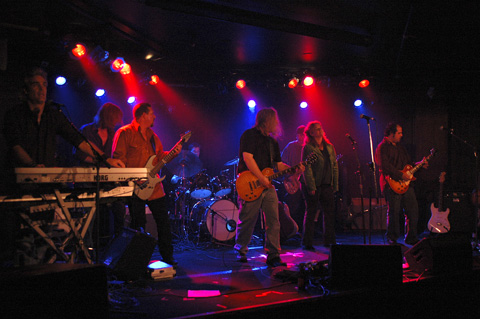 As our reviewer, Lee Henderson puts it, “looks like this band is ready to step up where Pink Floyd left off!” Truthfully, regarding my own weird and complicated taste of music, it has been a long time since a new album took my attention to a degree that I stopped and listened to the whole album at the first time of listening! I am so excited to be talking with Brian Erikson from House of Not!

It is an honor to have you at Art Rockin’ Magazine! Would you please inform us about your background and inauguration of the band?
Brian Erikson: Thank you for having House of Not on Art Rockin’ Magazine. My background has been rife with many styles of music, a kind of observer on life’s many winding roads. In the late 90’s I experienced a devastating personal loss. My travels led me to the Himalayas. I stayed in the area writing out ideas at altitude, eventually germinating into a conceptual idea… “The Walkabout of A. Nexter Niode”. The project,House of Not, was formed in 2002, to record and perform the 5 Part Rock Odyssey “The Walkabout of A. Nexter Niode.” The House of Not project is written and created by myself (Vocals, Keyboards & Orchestration) and Produced, Mixed & Guitars by Ken O’Gorman with supporting guitars from Eric Stever and Lou Roppoli and along with numerous other gracious contributors including Dee Brown, Garth Blake and Omar Ales. To date, Part I – Off The Path, Part II – Sexus & Part III – On The Madness of Crowds have been released worldwide.

From your biography I inferred that you have planned the whole project, the albums (and even the songs?!) ahead. I am intrigued. Could we say that the‘House of Not’ project is a super-conceptual collection of albums?
Yes. Initially there was a single album with a collection of songs that created a foundation. While traveling in the Himalayas the structure began to form, continually growing and growing. From this single album, a story began to shape and shift into a conceptual idea and the 5 album Rock Odyssey, The Walkabout of A. Nexter Niode was born.

I guess your “Tune Out — Turn On — Take The Trip!” motto has something to do with Timothy Leary’s doctrines. If this is so could we say that you look at the ‘House of Not’ project in a ritualistic way?
One could consider ritualistic in the sense that ‘The Walkabout’ is kind of an ‘Australian Aboriginal initiation. In comparison, the journey of the main character, Nexter (the Wayfarer), unfolds as a learning experience with spiritual, practical and emotional context. The reference to Timothy Leary is light-hearted but affirmative of the importance of the journey to understanding oneself. (“Turn On – Tune In – Drop Out”)

Your music is rich rhythmically and melodically. This is what many bands lack today. How do you approach music composition to attain this? Is it all about musicianship or do studies outside the music circle also help?
As far as rhythm and melody goes, I feel that these are important characteristics of listenable music. In terms of composition each song has to stand on its own, has to work with the flow of the album, and hopefully also reference the themes and ideas in the story as a whole. Since House of Not is more than just a band, it spans across music, storytelling, composition, metaphysics, philosophy and more. It is important to keep one’s senses open to all forms of music, from classical to modern alternative and from current world affairs to past historical events. Each of those has its own rhythm that can be used in our compositions.

What was the last book you read? What has been its possible influence on your music?
When I was in the Himalayas I had two books with me that inspired me to pursue the the idea of ‘The Walkabout of A. Nexter Niode’. The first is “Sexual Personae” by Camille Paglia & “The Invention of the Human” by Harold Bloom. These two books have been constant references for me in the development of the ‘House of Not’ project.

To what degree you improvise parts of the songs on stage – if at all?
On stage House of Not takes on a fluid, creative and improvisational character when playing live. The live approach allows House of Not to extend and broaden the presentation. Each song is composed into a final state but on stage we like to push the boundaries of improvisation when it comes to band members being inspired during their performances.

In the past golden days of rock music, the band members used to literally live together. What is your practice routine? How much time does the band members spend together?
At this time House of Not is a recording project. Ken O’Gorman and I embrace technology in the recording process. We spend many hours with musicians in the studio but we also build songs with our featured artists over time, and using the technology that is available to us between our remote studios.

Could you please explain the recording process of your albums?
The recording of “Part III – On the Madness of Crowds” took place over 3 years, from 2008-2011. The album was released in late 2012. It was built off the original demos,with lengthy periods of gestation and re-invention. The process between Ken and I is one of back-and-forth sharing of ideas. We are both really good at hitting the “delete” button. This album went through a long distillation process but we are both happy with the final product.”

In the Egyptian Book of the Dead, the deceased asks the God Tmu “How long have I to live” and Tmu answers: “Thou shalt exist for millions and millions of years, a period of millions of years”. If you were going to live millions of years, would you still remain a musician or would you may adopt other ways?
This is similar to Nietzsche’s idea of “eternal recurrence.” This idea forces one to ask oneself, “am I happy?” “would I do this over and over?” The Walkabout of A. Nexter Niode has become, for me, a 15 year endeavour. There are rewards and there are sacrifices. However, if life is Art for some of us, then the alternatives are few.

Have you already planned the next project after finishing the five albums of House of Not?
We are focusing all our efforts on finishing ‘The Walkabout of A. Nexter Niode’. We are releasing our brand new video ‘1000 Buddhas’ this spring and we are shooting for completion of the 4th album for the fall of 2015. What comes after this, in our eyes, is constant forms of promotion and the continuous building of our audience. As for what’s next… we will have to see what direction life takes us.

Do you make your music available for streaming? Where can our readers buy your music?
Currently our music is available for streaming. House of Not is available from New Zealand to Barcelona, in other words worldwide. You can find more information and synopses for House of Not and ‘The Walkabout of A. Nexter Niode’ at http://houseofnot.com. You can purchase Part I – Off The Path, Part II – Sexus and Part III –On The Madness of Crowds on iTunes, Bandcamp, CDBaby and virtually any other popular distributor out there. We encourage your readers to visit our YouTube Channel

Thank you for the opportunity to be on Art Rockin’ Magazine, and as always Tune Out Turn On — Take The Trip!