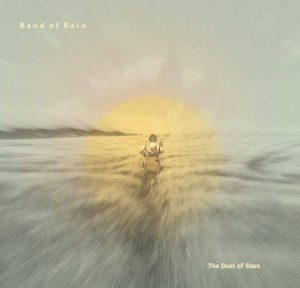 Six years after his last release (‘Sun In VIII’ – 2011) British composer and musician Chris Gill put together a team of bandmates, artists, and technical helpers for the finest recording yet by Band Of Rain. While some might call it progressive rock, I’d add a very liberal dose of world fusion to the description of this ‘Dust of Stars’ platter. While it does have a couple of slight nods to the heavier moments of Porcupine Tree, it adds many textures that may remind listeners of the floating tunes of Pink Floyd’s David Gilmour and even a touch of Alan Parsons Project. But that’s just a taste of it. The last cut made me think of an exotic post rock band with Vangelis on keyboards.

Band members featured are Micha Steinbacher, Ria Parfitt, Gordo Bennett and of course Chris Gill. You may remember the female vocalist Ria Parfitt from previoius BOR projects and she does a wonderful job on a couple of tracks here. She reminds me of a cross between Kate Bush, Happy Rhodes, and Toyah Wilcox, if you can imagine that. I understand from Chris that Micha Steinbacher did a tremendous amount of contribution to the compositions, production, mixing, and overall overseaing, to get this labor of love to market.

A major plus about ‘The Dust of Stars’ is all the changing textures in each song. The beginning of the album has a celestial intro, then crunchy guitar. ‘Dark Sun’ (track 7) even has throat singing which sounds fantastic.   Surprise developments using a host of instruments like sax, sampled tabla, plenty of keyboards, very fluid guitars and a hodgepodge of atmospheres, allow the ebb and flow to be perfectly balanced. From beginning to end, this is a pleasure to become engrossed in.  A big applause to everyone who was involved with this creation and a hat’s off to Chris Gill for putting the right people together. RECOMMENDED.