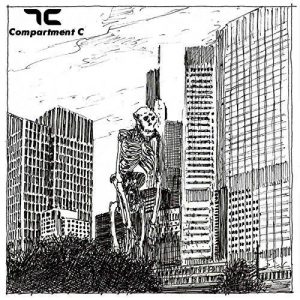 This, the third full length release by Italian avant garde trio, is something to behold. Any fan of bands such as This Heat, Massacre (The Fred Frith band), Cassiber, and similar bands, along with the more aggressive King Crimson, David Torn, and Rec Records output (specifically the electric guitar fronted groups) , would surely find interest in ‘Compartment C’.

The change in line ups over the years have made some differences in 7C’s sound, mainly with this new one having a consummate guitarist (new member Tony Berardinucci) at the forefront. Their debut ‘Discopatia’ (2011) had Claudio Carozza (noises) and the second release ‘Red Spider’ (2013) added Fabio Della Cuna (tenor sax and alto clarinet). The two stablemates on all recordings have been Davide Di Virgilio (drums, percussions, loopstation, synth, noise) and Giuseppe Iubatti (double bass, noise).

An intro of only 45 seconds, an ‘outro’ of 50 seconds, the six other compositions range from a bit over 4 minutes to close to 9 1/2 minutes. The timing and arrangements are perfect. ‘Depression’ (trk 6) begins with bubbling electronic percussion (has a more exotic Bill Bruford feel), uses less guitar then usual and really showcases Davide’s drum work. The following tune (trk 7) starts calm with bass and wandering (Richard Pinhas like) distorted lead guitar. The most extended piece on the disc, it builds into a powerhouse to say the least. With it being the only reference to heavy rock (Black Sabbath),  grunge and postrock from the guitar chords, the music itself still fits nicely into the new format of 7C. There is nothing to dislike on ‘Compartment C’. It is brilliantly put together and a premium example of inventive music.  HIGHLY RECOMMENDED!!!