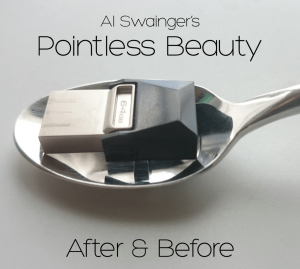 A prime all instrumental (with exception of mnemonic syllable of tabla) release from multi talented Al Swainger (all compositions, photography, artwork, sleeve design, bass, keyboards, voice, drum programming and production). If his name looks familiar, he has been a long time free lance jazz musician going from commercial, now to a much more expanded and sometimes experimental fusion of sorts. He has also been on previous recordings including Snow Giants ‘Un’ (05Ric, & Mike Outram) and Grice ‘Alexandrine’  to list a couple.  He also has former Pointless Beauty releases you may very well want to check out.

The music is a mature lovely jazz fusion with slices of eastern and jazz rock in a very strong ECM vein, although the seven tunes range from a congruency not unlike Pat Metheny, Mark Isham, Kenny Wheeler, Dave Holland, and Enrico Rava, to name just a few. Also mixed in is a distinct exotic presence, which you will notice instantly. The listener will hear plenty of graceful trumpet, mellow guitar, skillful keys, and creamy partially restrained bass (sometimes fretless), along with tight tasteful drums. There is not a weak note on the disc. Swainger brings on board musicians Neil Yates (trumpet, flugelhorn), Mike Outram (guitar), George Cooper (keyboards) and Mark Whitlam (drums). The entire recording is beautiful and top shelf.

Al uses nice field recordings (ocean, thunder, train, children) to add atmosphere to some compositions. Occasional exquisite percussion like glockenspiel is also placed for example, to create an indelible melody in a storm on the beach.  ‘After & Before’ is successful in keeping the audience attentive and relaxed at the same time.  His long history of learning and understanding so many different instruments show in his ability to compose so ideally with every part written. He even played trumpet and then French horn in his youth, in big bands and classical ensembles. One can hear the lofty skill in the trumpet parts which make so many of the pleasing melodies. On track six (‘Cyrano’) the band cuts loose and shows you their capability in the energy department. Directly following as the last and title cut, ‘After & Before’ will bring a tear. This one is for fans of Terje Rypdal’s duo output with Ketil Bjornstad (‘Life In Leipzig’- ECM)  with gorgeous piano and lead guitar work. The ending will leave a restful smile on your face. And then you realize that it was the entire disc that had you feeling so good. HIGHLY RECOMMENDED.