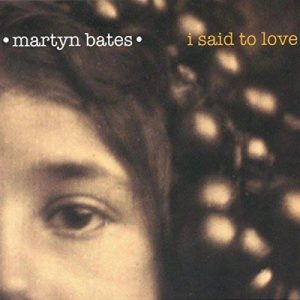 I’ve been a hooked fan of Martyn Bates since his one of a kind experimental band ‘Eyeless In Gaza’. I bought everything on vinyl (and now CD) by both his band (a brilliant and endless stream of creations unlike anything I have ever heard and suspect it will remain as such). and his solos. With this, the 16th solo work by Bates, (not counting the comps, singles, EP’s, guest appearances, and many collaborations with other artists, you would think nothing could be left, but you’d be very wrong.

This equals the utopian ‘Red Rust September’ by Eyeless In Gaza (my all-time favorite EIG recording). Simply stunning with strings backing Martyn’s jeweled and often melancholy voice. He sounds every bit as blissful as he always has. Songs include Martyn performing guitar and vocals on fifteen tracks of storybook, fields of pastel, and things dreams are made of.  The first listen left me speechless. It took a second spin to begin this review. This one will stay on my recommendation list forever. All I can say to readers who have never heard either EIG or Martyn’s solos, you need this one. A grand place to start your collection. ‘I Said To Love’ gets a massive applause from this listener.