Warning: "continue" targeting switch is equivalent to "break". Did you mean to use "continue 2"? in /homepages/2/d333217406/htdocs/artrockin/wp-includes/pomo/plural-forms.php on line 210
 House of Rabbits – Songs of Charivari (2016) review – Art Rockin' 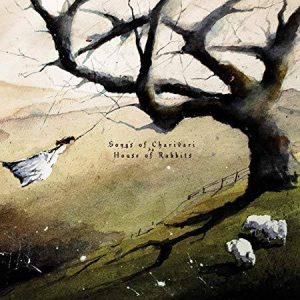 Formerly a ‘avant-art-metal project’ called FEASTofFETUS, this Los Angeles band changed names and directions with this debut ‘Songs of Charivari’. With what the group calls ‘Vaudcore’ (a blend of hardcore and Vauderville), they actually produce a much more expanded array of styles. Of interest is, this was recorded and mixed by Jason Schimmel (Secret Chiefs 3, John Zorn, Estradasphere) who also guests on sitar and mandolin, plus it was mastered by John Golden (Primus, Melvins, Chris Isaak). House of Rabbits consists of Jess Gabriell Cron – vocals, Mike Caffell – drums, Ian Malcolm – keyboards,  Andy Kovari – guitars, and  Eloy Palacios on bass.

The disc begins with a rowdy crowd chant which might frighten off the conventional music listener, but shortly afterwards is an operatic Vaudeville hybrid of music that sounds as if it was fused with Sleepytime Gorilla Museum, Norwegian pagan folk, happy bop, and avant cabaret. With each song you get colorful mixtures of that and assorted theatrical coolness. Nothing about House of Rabbits is boring or stagnant. You’ll even find remnants of medieval to Cardiacs spookiness brilliance, and in places I heard the spirit of Arthur Brown’s Kingdom Come.

This dramatic recording is worthy of endless listens and includes some quite beautiful passages along with gothic, adventurous, grand piano sprawls, with patches of Latin, exotic, and ghostly ballad. From those twists and turns, the outfit takes you down operatic tunnels and on to unexpected progressive rock plateaus. This being a self produced, self released project, the boundaries of styles and lyrics are not a worry. If I did not know better I’d swear Nils Frykdahl of Sleepytime Gorilla Museum was involved in this. Let’s just say if you love that master of the studio and stage, in his explorative dark folklore, crazy good blends of metal/progressive/avant themes, then you will love this. In fact it seems like Jess Gabriel Cron could be his twin brother.

Fourteen songs (53:36) with a fold open digipak, a booklet, and artwork that will thrill Edward Gorey fans (but done by an artist named Grezgorz Chudy, a watercolorist from Poland). There are plenty of guests on ‘Songs of Charivari’ that include female vocals, glockenspiel, accordion, and more, that give even further appeal and dimension to the music. Great with both energy and refinement, the entire performance is spectacular and this is one live show I’d be thrilled to attend.

With all its stage perfect glory, the soup bowl of compositions, in which one of them could even sneak into the forever famous Rocky Horror Picture Show (yes there is even a touch of comedy slipped in), this rollercoaster ride of fabulous avant theatre is a complex high level listening experience.