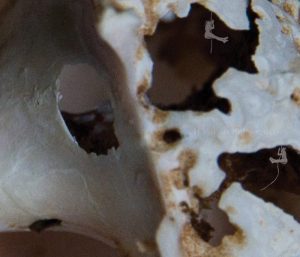 OTEME’s (Observatory of Emerged Lands) third jewel (translated to English ‘The Body in the Dream’) brings yet more of this unique blend of avant RIO elements and progressive pop. ‘Il Corpo Nel Sogno’  continues in the supreme stirring together or alternating simple Canterbury vocal pop gems with avant garde brilliant chamber orchestra, even bigger, better, and with more shine than ever.

Add more unusual rhythmic glow to the otherworldly concoction, a tad more exotica, and ideas that could never go over in a static commercial world, and you have before you (if you are smart enough to buy it) another totally unreal, once in a while, unequal masterpiece. OTEME’s previous stunner ‘L’agguato, l’abbandono, il mutamento’ (2015) which I reviewed as well, made the progressive music world stand on its head. It is one man from Italy who is the mastermind behind these outstanding works and that is Stefano Giannotti (voice, electric guitar, farfisa organ, electronics, percussion, harmonica).  To much of the world he works quietly, what seems to be undercover, but diligent and patient, often taking many years to complete a project. With this third offering, he has help from musicians Valeria Marzocchi: flute, voice/ Lorenzo Del Pecchia: clarinet, bass clarinet/ Maicol Pucci: trumpet, flugelhorn/ Marco Fagioli: bass tuba, trombone, syphon/ Emanuela Lari: piano, keyboards, voice/ Valentina Cinquini: harp, voice/ Riccardo Ienna: percussion/ Gabriele Stefani, Edgar Gomez: additional voices/ and special guest Antonio Caggiano: vibraphone on ‘Orfeo e Moira’ and ‘Blue Brown’.

While this release is a tad less Canterbury infused, it brings more classically oriented modes, and without question, still up in the clouds fantastic with both these moments, the esoteric excursions that drip with partly dangerous dream, and tribal rhythmic measure, with wings of chamber rock. There is absolutely nothing else like this, which is a trophy in itself. Stefano Giannotti does not stand still with each release stretching further into unpredictable directions. There are more vocal pieces that straddle the edge of opera, experimental, and a pillow listen with headphones, that take you into another place. A presentation where at a moments notice, new and unexpected instruments such as harp, give boost to trippy passage, classical flight, and sweet slithering brass and winds. This newest monument could be described as a more contemporary Canterbury interspersed with what might be happening if Paul Bley (RIP), Michael Mantler (RIP), Lindsay Cooper (RIP), or Robert Wyatt were to put out a new release today. But that is just for the pondering. The imagination is off the charts and so is ‘Il Corpo Nel Sogno’, being a rare treat of highly listenable RIO for the new world, with smooth corners, shades of theatre, all the emotions spread about, and something to cause the listener to be astounded by. ABSOLUTELY and INSANELY RECOMMENDED.