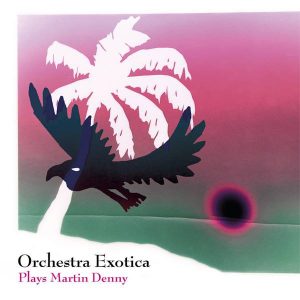 As the title and the band’s name implies, the music within is Orchestra Exotica’s version of the Exotica genre, which was defined by Martin Denny back in the 1957. That music was a fantasy mix of South Pacific and the Orient. Later composers (like Les Baxter) brought in influences from Oceania, Hawaii, The Andes, and even Africa. The music on this Orchestra Exotica is all that but modern day listeners may be more apt to describe it as Caribbean space age jazz with a lounge music quality. The whole idea for the album came from the original children’s play written by Bruno Vansina titled ‘MaiTé, het meisje en de vogel’ (translated ‘Mai’Tie, the girl and the bird’- as the bonus disc of this package). Pierre Vervloesem, the master interpreter he is, took these pieces and did a bit of revamping, but not to the extent of defacing them.

An absolute essential release for the fans of Bruno Vansina, Pierre Vervloesem and Peter Vandenberghe (X-Legged Sally/FES world). This spectacular line up of elite musicians take on a unique (as always) cover of not just Martin Denny, but also Jacques Ilbert, Nicholas Roubanus, Harold Johnson, Les Baxter, Ken Darby, Charles Wolcott, and Julius Wechter. Frank Van Eyken’s vibraphone and marimba give the pieces a boost for the tropical atmosphere. Pierre Vervloesem’s guitar work also, parked in a fluid semi space tropical island sound much of the time, brings the stylings to a fever. Expect the unexpected!

A variety of medium to slow tempo pieces weave their way among the fifteen cuts of the main disc. For the uninitiated , one could imagine 1960’s safari film soundtracks, bits of Gong’s ‘Shamal’, ever evolving eastern influences, lots of nature sounds (birds, ocean), percussion (Latin, gongs, flexi tones, glass, woodblocks), effects (aquatic, metal, horns, all sorts), and unidentified objects. All this laid out beautifully, with a master guitarist named Pierre Vervloesem sounding like (for those not familiar with him) a mix of Robert Fripp and Steve Hillage. The music takes you on an adventurous ride through not only tropical settings, but at times has a circus mood and is alternately humorous and mysterious. The band makes sure to be playful, complex, occasionally simple, quizzical, and always fascinating. Some of the zany parts reminded me of Samla Mammas Manna.

The bonus disc ‘Mai’Tie, the girl and the bird’ is a performance of all the same songs in a different order, with the addition of one composition by Helen Parker (‘Akaka Falls’), which is quite beautiful, focusing on flute, guitar and marimba, sounding like a Mike Oldfield piece. Also, a big change is the scaled down band. This bonus disc is done by only three of the members (Bruno Vanspira, Frank Van Eyken, and Pierre Vervloesem) each taking on some extra duties. The music takes a more electric sound, while retaining the same general music as the original disc. Plenty enough alteration to make for yet another fifteen tracks that hold your attention and captivate the imagination. A few distinct twists and changes to thrill the listener who already fell in love with the first disc. You get a fast version of ‘Misirlous’ (track 6 on main, track 11 on bonus). Obviously some programming is used by Pierre to take care of the extra sounds. This whole affair is marvelous and begs to be heard. If you need a exotic vacation, perhaps this would help you get the mindset, and relax in the waves of tropical dreamland, where fantasy meets fact. RECOMMENDED.