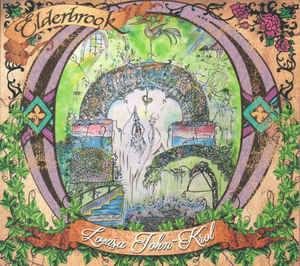 Louisa has spent two decades making magical music on independent labels such as Prikosnovenie. She decided to start her own label and control her very innovative musical vision, and ‘Elderbrook’ showcases some compositions spreading across the years 1981 through 2017. With no less than 28 musicians helping out, the Silo String Quartet, and sounds from Australian birds, and various samples, Louisa performs on mandolin, sansula, ocarina, chimes, elephant bells, Tingsha, dragon-scale curtain, rainsticks, lead and backing vocals. A prized list of guest vocalists also appear, including Priscilla Hernandez (who also has some very dreamy solos). The talent is overwhelming. Perhaps it is best to use one of the quotes from the notes of the gorgeous multi fold out digipak double CD. “50 elves from 15 nations unite in a trove of ethereal songs” In fact, this is a soundtrack to her Elderbrook Chronicles.

The music moves gracefully from fairytale bliss, to rich dream pop, and Celtic based fantasy. The style mixes a strong but sweet sound of Loreena McKennitt (who she shared a compilation called ‘Effleurement’), Sarah Brightman, Kate Bush, and various heavenly voices plus folk singers from the likes of Iona, Clannad, and Capercaillie. Louisa is most skilled at going from playful to tearful ballads, from just above sad, to spiritually uplifting. This, the stamp of her music, is simply ravishing. Do not get the notion that it is all somber and utopian. Although the main parts of the pieces are in the land of elves, there are surprise touches with odd percussion and sound effects which keep the listener a bit off guard as well.

Vivid, rich, and alive, very unlike new age or imitation fairyland recordings of the past, ‘Elderbrook’ stretches out over two discs, with detailed storyline (included in booklet inside the digipak), and will please both ethereal goth fans, and those who are attracted to mysterious music. This kind of music used to show up at a few defunct music shops like Middle Pillar, Projekt, and Hyperium (a German label that specialized in darkwave, neoclassical, ethereal goth, and ambient). It is much harder to find sources for those styles so active in the 1980’s, but with Louisa John-Krol’s work, the bountiful brush strokes of ancient, Celtic, and magical child-like energy, that often emits sunlight or full moon, brings the captive listener a whole new experience. And Louisa’s voice is not so much haunting, but dreamy and faerie-like.  Her music has a distinct romantic essence and medieval charm. So you won’t be surprised that she has read plenty of fantasy masterpieces like Chronicles of Narnia, and Lord of the Rings. Here, she has made her own chronicles, and a supreme work it is. I cannot imagine how long it took to put this all together but suffice to say, it is well worth the money to buy a copy and enjoy the time with the enchanting music. RECOMMENDED.