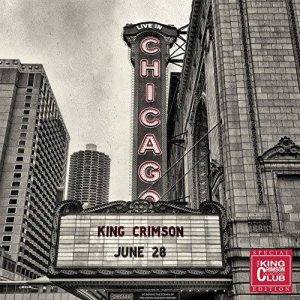 Note: I have the King Crimson Club edition – hardbound double CD with nice booklet inside. Import versions are also available such as the Japanese.

The release of this official “bootleg” as it is called, gave some of the most interesting words from Mr Robert Fripp in the booklet, inside of the 2 CD ‘King Crimson Club’ hardbound package, one will ever read. In this interview, Fripp talks about all the different ‘definitive formations’ of Crimson, which is must read content. Rather than rehash all that, I suggest anyone that ever had (or has) even a touch of love for this master progressive band of the earth, do yourself a great service and purchase a physical copy of ‘Live In Chicago : June 28, 2017. Not only does Fripp call this an exceptional live show by his band., I also call it one of the top live recordings from the vast collection of live releases ever by King Crimson, and I own dozens of their concert recordings starting with early bootleg cassettes (that was the only way they came back in the 70’s and 80’s) to grand DVD’s, and a host of CD’s that Inner Knot have been releasing over the last decade.

One must forget, or forgive, Robert Fripp’s past statements about not wanting to live in the past, or more at, perform old compositions from the early Crimson releases. If you have followed much of the banter through the years, then you know Fripp is apt to change his mind and do things that no one else would fathom. His most important descriptions of his gathering of high level musicians are re-invent and re-imagine

So here we are with yet another extension of a band member concoction made up of three drummers (Gavin Harrison/ Pat Mastelotto/ Jeremy Stacey [who also plays keyboards]) , two guitarists (the master himself Robert Fripp [who also plays keyboards] and Jakko Jakszyk [also on flute and lead vocals], a sax/flute player named Mel Collins (a god to Crimson fans from way back), the one and only Tony Levin on basses, stick,and voice, and former drummer but now keyboardist Bill Rieflin. Fripp refers to this as the eight headed beast. Once you listen to this almost overpowering concert, you’ll understand why.

It is the instant attention to detail and the humongous power the band displays on this live show that takes the listener by storm. Also a five star sample of the entire catalog of studio releases are presented and done in a way never done before. Meaning that they have new life and are often breathtaking. Some new songs are also performed so as to give icing on the cake. After the intro ‘Bellscape & Orchestral Werning’ (an ambient piece to warn the audience of what is to come), the band does a blitz with a 9 1/2 minute version of ‘Larks’Tongues In Aspic, Part 1’.  Hold on you your hats because it is followed by a drummers onslaught version of ‘Neurotica’ and a magicians display on sax by Mel Collins.  A treat from Jakko comes next, who wrote the lyrics  to ‘The Errors’ , a new and never released slightly eastern sounding track that could easily fit on to any of his solo releases. Jakko also sings ‘Fallen Angel’ as close to John Wetton as anyone ever could. A first ever live version and a beyond belief version of the song that will thrill all ‘Red’ lovers. ‘Islands’ will bring you back to your feet only for a moment until you drift back up into the ether again, from it’s intoxicating allure and pastoral bliss.

‘Indiscipline’ starts off Disc 2, with pristine energy and everything you want plus more. ‘Easy Money’ breathes new life and made me almost cry with joy, since ‘Larks’Tongues In Aspic’ has always been my sentimental favorite Crimson album. They do both parts of that title song as well. It’s hard to ever imagine a live show without that Stravinsky fed masterpiece, at least for me. ‘Interlude’ presents some wandering bass work with quivering flute for a whimsical break in the more aggressive stuff. The 15 minute ‘Starless’ is a sweet course, just before dessert. They do a wonderful cover of David Bowie’s ‘Heroes’ (a tribute, since Fripp was so involved with that album). The final song on the second disc ’21st Century Schizoid Man’ is a crushing 16 minute powerhouse that will leave whatever senses you have left, on the floor. It would take me pages to try and talk about each song but understand that every note is in place, and this concert is a historical one, to say the least. Each musician is at their peak and spot on. The set lists are perfectly arranged so you get a back and forth of modern and old, heavenly and dashing, animated and unbelievable. I’ve included the song list from both CD’s below for your interest. The band line up is Robert Fripp (guitar, keyboards), Mel Collins (saxes, flutes), Gavin Harrison (drums), Jakko Jakszyk (guitar, flute, voice), Tony Levin (basses, stick, voice), Pat Mastelotto (drums), Bill Rieflin (keyboards), and Jeremy Stacey (drums, keyboards).

This affair was audacious, incredible, and totally unreal. Not since the 2016  CD/DVD prized live release of ‘Radical Action To Unseat The Hold Of Monkey Mind’ (which I own the blu ray, DVD, 3-CD box set of), which gives fans a grand visual concert (and quite a different set of songs), have I been so stunned by King Crimson’s performance. No complaints, no ifs ands or buts. This is an amazing package that will remain as one of the best live releases I have ever owned. So recommended I can’t even put the right words in front of the word. RECOMMENDED, WITHOUT QUESTION (so I put it after).