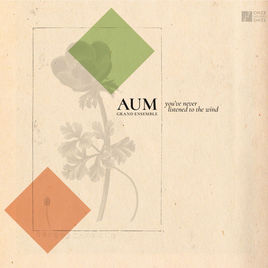 An opulant blend of poetry, theatre, classical chamber, gamelan, ambient, sacred and otherworldly glory that I have rarely heard in my lifetime. Such a mix of styles that sometimes surprises the senses, Aum Grand Ensemble, led by Julien Pontvianne (who composes all the music) from France, creates textural works that occasionally reminds me of Popol Vuh’s (Florian Fricke) more sacred soundtrack works such as ‘Sei Still, Wisse Ich Bin’ The group have two previous recordings (‘Jail Poems’ – 2010, unreleased but download is available, and then ‘Silere’ – 2014, which is with the same elements but based on ‘Walden’ by Henry David Thoreau).

It may seem unreal at times, this set of compositions float like thick lava, and on rare occasions sprew thunderous bursts out of gorgeous sparse meditative voice. It also may begin wth soothing gamelan bells, move to solitary piano strokes like Erik Satie , haunting strings, nature sounds, hymnal vocal pieces, oriental prayer-like moments, all with a classical seriousness. If you are willing to listen in a totally devoted way, then this all will not be wasted. If I only had one word to describe, it would be cerebral.

While 98% of the material is ceremonial with clarity and a calming effect, the music is not void of quick twists and exploration that seems to always be occurring. With each ghostly off the path action Aum Grand Ensemble take, the fleeting music returns to a spiritual place. ‘You’ve Never Listened to the Wind’ is a set of twinkling works that are full of luster and have a beautiful oddity about them. Calm, thought provoking, stately, image inducing with a purpose, the music from Julien Pontvianne is moving and elegant.