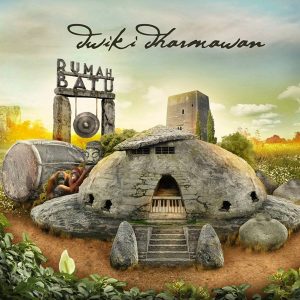 From the initial moments, there is euphoric beauty with flute, piano, and floating percussion, followed by nimble eastern integration with a collision of Weather Report, Il Baricentro, Arti+Mestieri, and ECM polish. So tight, so perfectly performed, it makes you jealous. It is to be expected with these magnificent musicians, a team with purpose and proven track records, with a number of combinations and other releases.

The recording is not without variety. ‘Paris Barantai’ (track 2) begins with a classical piano intro, playful and almost cartoonish for a few seconds. Quickly the body of the song unfolds with Sa’at Syah, who also plays flute on several tracks, coming in on vocals. A short part followed by development of percussion and multi part piano, and dynamic changes in a smooth ascension. Nguyen Le performs some frisky and biting lead guitar lines throughout, as well as some sympathetic soundscapes. Although many styles bubble up along the way, a distinct eastern Indonesian fusion keeps strong companionship amongst it all.

‘Impenan’ (track 3) tosses a gorgeous beaming female vocalist upfront named Dewi Gita, who is an Indonesian star of her own. With a utopian and exotic musical frame that alone, is magical beyond belief, the composition will leave you melted with a smile on your face. Several of the eight cuts are extended over ten minutes (10:39/11:43/12:24/14:14) which allow time for the music to travel, expand, and resolve in truly gratifying ways. Dharmawan has such a mass of incredible experience and creativity, it is a marvel to hear what he releases with each project. He often moves from piano influences of Keith Jarrett, to Keith Tippett. Comfortable with classical and jazz, and all that goes beyond.  ‘Rumah Batu’ is another feather in his hat. Bringing together this brilliant keyboardist/composer/producer, with unreal bandmates like Asaf Sirkus (drums), Yaron Stavi (upright bass), Nguyen Le (guitar), Carles Benavent (bass), and the many other fabulous singers, percussionists, Nyomann Windha’s Gamelan Jass Jegog (Balinese Gamelan & percussion orchestra), and flutes, was yet one more grand achievement for Leonardo Pavkovic of the evergrowing and unmistaken MoonJune Records label out of New York.

The 14:14 ‘Rumah Batu Suite, Part 2 – Perjalanan’ (track 6 – and composed by Dharmawan, Le, Benavent, Stavi, and Sirkis) will shake you from your shoes, with its bold many moods blow out, from avant garde to meditative carpet ride. At the end of hearing the entire album, you realize you have been a part of several strong emotional movements. The whole thing is quite a celebration of joy, calm, transcendence, and inner peace. But most of all, a complete and full engulfment into an exceptional musical experience. RECOMMENDED.