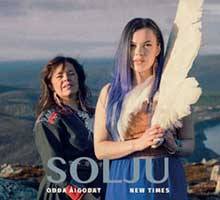 Solju is the mother/daughter duo of Ulla Pirttijärvi – vocals, yoik, and Hildá Länsman – vocals, yoik along with members Samuli Laiho – programming, synths, guitar, piano, glockenspiel, and Teho Majamäki – percussion, vibes, hang drum. Also appearing on the release are guest artists Czech National Symphony Orchestra – strings, Paavo Lötjönen – cello, Mikko Neuvonen – throat singing, and Janne Puurtinen – synth bass, synthesizer. Ulla and Hilda are from Utsjoki, Lapland (a nothern part of Finland). They are Sami musicians who are keeping their ancient native culture alive. The unique vocalizations are called yoik. There is also more common use of singing included among the songs. Solju mix modern ethno music with traditional spiritual Sami for some of the most heavenly sounds a person could experience. ‘Odda Aigodat’ (translated to ‘New Times’) is their debut and for those not familiar with this type music, former references would be some of the albums put out by Northside Music (an American label back in the 1990’s that brought some otherwise unknown Scandanavian groups to the ears of much of North America), and brilliant hybrid folk acts such as Hedningarna (a mix of Swedish and Finnish musicians who also use a lot of yoik in their compositions), and Värttinä (a trio of women singers who sing mostly in the Karelian dialect of the Finnish language and are from the southeastern part of Finland). That said, this ‘New Times’ release is a supreme example of a grand mix of native and modern Sami music. It is important to note that Solju does not make techno ambient yoik music such as musicians like Wimmie (Wimmie Saari is also from Finland and perhaps more well known to the world music lovers).

Except for two traditional yoik songs, all the music is composed by either Ulla and Hilda, or just one of the two. The CD comes with a very nice triple fold out digipak with 16 page booklet (which has all the song lyrics in both Sami and English) and beautiful photos of some of the landscapes and mother/daughter. The production and recording are pristine. The opening and title track ‘Odda Aigobat’ is unreal in its beauty. To some it may sound like a divine blend of native American Indian and Asian folk, but soon the lucky listener will fall into the stargazing frame of mind to absorb and truly appreciate this dreamtime music. Both the traditional tunes and the original compositions are breathtaking.

Parts of the music could be a Kate Bush yoik themed album with their exotic, natural sounds, and electronically enhanced effects. Added are moments of throat singing (like tuvan throat singing), ethnic drums and percussion, varied voices. This is an ancient treasure box of Sami music that has been given a fantasy fused modernization unlike anything yet heard by human ears. Solju describe their sound as ‘colorful, genuine, vivacious, atmospheric, and earthy’. I’d add otherworldy to that. Although from the many times the listener is lifted to higher plateaus, they are gently cushioned back down to earth. Just be ready to take a few journeys into other realms. Great realms! This release is a blessing. Everyone should thank Solju for keeping their native music alive and beyond. Listening to this is a magical and sacred experience.   VERY HIGHLY RECOMMENDED.