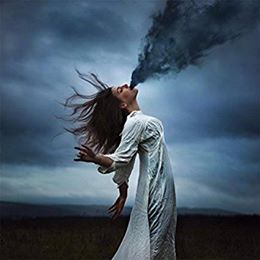 For those who have never heard the band, try and imagine a mixture of Heldon, Fripp’s Crimson in their more textural instrumental jam sessions, along with slices of Edhels (French progressive instrumental band fronted by Marc Ceccotti on guitar), Philharmonie (another French progressive instrumental gem of a band featuring Frederic Lepée on guitar), and you could fill in the blanks with any number of more pastoral groups who have done upscale pieces that range from soundscape to soundtrack music. The sweet fact is Spoke of Shadows display a squeaky tight, fully skilled, stacked to the ceiling talent of personally superb instrumentation, composition smarts, and well above average performances. The arrangements are terrific. Mark Cook (who handles a plate full of duties) goes from sounding like Robert Fripp to Allan Holdsworth in a flash. He also works wonders on lush strings, heavenly tron, and alien drifts on keyboards. Not to mention coolness all over with creative synthesizers.

It is immediately recognized that Mark has a well chosen and perfectly matched partner on drums/percussion named Bill Bachman. ‘Strata’ (track7) breaks away to a more rolling (think similar beat as Pink Floyd’s ‘Great Gig In The Sky’ , or Steve Hackett’s ‘A Tower Struck Down’ from his debut solo ‘Voyage Of The Acolyte’, with it’s rolicking synth pattern). Just after that things melt back into an easy goes it beauty called ‘Born Into This’ (track 8). A section of this is in the Fripp & Eno realm but add emotional drums for the extra nice up flow. It is this nice open air of ideas that the two musicians excel at. And with no limits of their musical performance abilities, you have excellence.