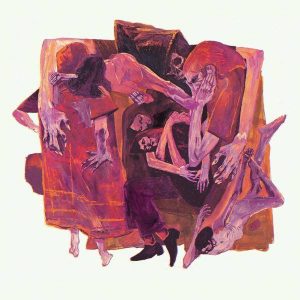 From Montreal, Quebec, (Canada) Garnotte is a 5 piece French Canadian band using 3 extra vocalists for harmonies on this debut release in the form of a 9 song EP. The surprising mixture of classical, classic rock, blues, pop and progressive (in the same sense that The Sweet era ‘Love Is Like Oxygen’ got classified as progressive rock), takes you on a multi textured, many changes ride. All the songs connect to each other and the track ‘Scutigeres’ is divided into 4 parts. If you took a long list of late 60’s and early to mid 70’s bands like The Guess Who, Rare Earth, early Steve Miller, Iron Butterfly, Santana, Neil Young, Ten Years After, early Deep Purple, Cream, Uriah Heep, and The Kinks, and made them all one package, then this is what Garnotte sound like on this release. Call it prototype progressive but whatever you call it, it is extremely well done.

Opening with ‘Prologue’, you get the only heavy laden keyboard instrumental on the disc. Each song flows into the next so you can count this as a concept album (although it is only an EP). Along the trip, acoustic guitar is used at spots, then at the ending song (‘Epilogue’) to send you off into slumber.  It should be noted that the vocals are in French, so imagine a French Canadian version of all the bands mentioned above. Lots of twists and turns with nothing standing still for long. Just the right amount of blues, rock, and classical, that brings things into the progressive world. The vocals are close to The Sweet’s level of harmony, but not quite matching, although throughout, very good. The group includes David Bourdonnais (lead vocals. guitar) / Francis Minville (guitar) / Samuel Cadieux (Bass) / Félix Rioux (Organ, piano, synths) / and Dominic D. Matthews (drums).

If Garnotte can produced this much excitement and versatility in a 25:38 minute 9 song EP, I sure would love to hear them do a full length with all the stops pulled out. Not only is this electrifying, but it keeps the listeners attention and deserves recognition for daring to run the gamut of all these 70’s bands with touches of psychedelic. They have a single out (‘Vertige’) with strings which again, goes off into other directions, so look out for something even bolder and bigger next time.