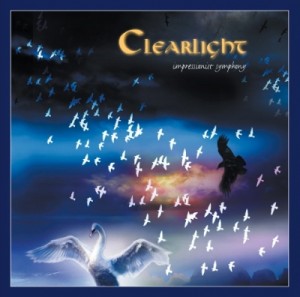 Latest Clearlight project by the supreme Cyrille Verdeaux is outstanding and not to be missed. Bringing back original band mates from debut “Clearlight Symphony” (1974) With Gong’s Didier Malherbe, Steve Hillage and Tim Blake. Also appearing are Paul Sears (drummer for The Muffins), Linda Cushma, Chris Kovax, Craig Fry, Vincent Thomas-Penny and Remy Tran. This sweet line up affords Cyrille to give the listener a very expansive sound with often lush to pastoral moments then powerful jazz fusion hybrid passages. Fans from the 70’s may recognize a nice spread of stylings that could be seen as influences from all of Clearlight’s previous releases but a substantial classical backbone exists throughout. This is fitting since the concept of the recording is specific music composed fort both the visual and audio impressionists of France. You can imagine the music being quite beautiful and you’d be correct.

Some of the glory days are present with plenty of glissando guitar from Hillage, tubular bells by Don Falcone, celestial synthesizers by Tim Blake and Remy Tran, and of course piano, string ensemble and more by Mr. Verdeaux. “Impressionist Symphony” also has a mature and present day sound using influence from classical composers like Ravel, Satie, and Debussy. The merging of cosmic and classical has been a trademark of Verdeaux’s. There were a couple of moments, especially in “Gauguin Dans L’Autre” (track 6) where I heard similarities to David Bedford’s gorgeous “Instructions For Angels”. Simply spellbinding! In my opinion, this is worth the price of the CD alone. Another stunner is “Lautrec Too Loose” (track 7) which features just three people, but be prepared to hear supreme gliss guitar (also fine acoustic guitar) by Vincent Thomas-Penny, cosmic synth perfection by Remy Tran, and the rest by Master Verdeaux. Clearlight full blown by a trio!

The final cut is just a duo (“Monet Time”) which lacks nothing, ends perfectly, and gives off love with piano and violin oh so beautifully. Can it be? The fewer people playing the better it kept getting? Perhaps this is the true blood from the heart of Cyrille Verdeaux. Recommended!