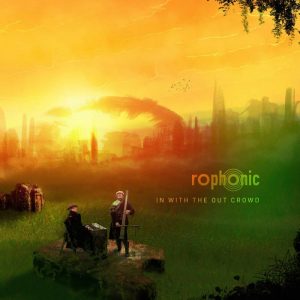 A dreamy hybrid of fertile, floating, surreal, majestic, scattered folk ballad, early music explorations, and neo space atmosphere. The initial seconds are a ground zero take off, with Colin Blunstone-like cottony soft vocals, in tender ballad, along with an airy tropical tinged thing of beauty. “In With The Out Crowd’ is by Peter Rophone (who performs vocals, guitars, double bass,harmonium, flute, all vocal arrangements, and writes the lyrics), and Michael Harding (piano, organ, sythesizers, samples, and clarinet). Guest musicians are Cath James (strings on ‘The Jewelled Crown’). The album cover is a combination of futuristic, fantasy, and even a bit looming. You learn that the glaring bright sky is part of a theme which I will leave for the hopeful listener to discover more about.

Both musicians have impressive backgrounds, with Peter playing acoustic guitar and singing on Regal Worm ‘Pig Views’ and also a guest on I Monster ‘Bright Sparks’, as well as formerly being one half of The Third Half (a Sheffield duo).  Michael has many years of experience and is one half of Animat, an ambitious electronics and soundtrack outfit, who have made quite a few recordings. He also has a solo out now. Both Peter and Michael have released 3 previous Rophonic EPs, but this is their first full length and most expansive to date. ‘The Erl King’ (track 3) recalls the style and sound of Declan de Barra (singer, composer, musician formerly of Clann Zu, who has solo releases now) with its distinct slightly dark celtic prose. Following that ‘Sunhead’ (track 4) has a glorious warm atmosphere supported by multi tracked voice in choir arranged pinwheels, daisies, tulips, rare roses and buttercups. More sacred beauty with Blunstone-like vocals and de Barra style wonderment.

‘In With The Out Crowd’ is very different from anything else released by Martin Archer’s brilliant and brave Discus Music label, and with certainty, a supreme addition on all levels. Primarily a vocal oriented recording, with lush framing from the sometimes sparse but blissful instrumentation, Peter’s vocal arrangements carry the listener into hidden places and far past the edge of reality. But those places are like rich gardens, surreal planets, sweet slumber, and more than gorgeous multi regional time periods. The miles of treasure Rophonic uncover, and allow the witness of, are compositions which discover generous and gentle places for the soul. Each piece comes with a silent curtain opening, presenting the audience with elegant enchantment from an imperial stage. The entire set of works are somewhat comparable to the more wayward and mysterious vocal pieces of Martyn Bates and the music of his band Eyeless In Gaza when in otherworldly mode, however Rophonic have their very own exclusive sound, which brings generous and unusual styles together on a singular platter. The duo has created a remarkable masterpiece. MOST HIGHLY RECOMMENDED.