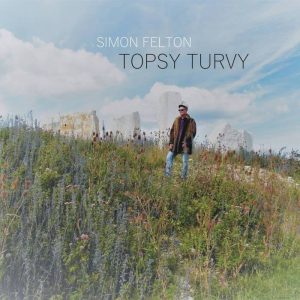 [note: this is a limited edition of 50 physical CD’s, so get them while you can, otherwise download is always available at Bandcamp]

Owner and manager of the terrific British pop music indy label Pink Hedgehog Records, multi-talented musician Simon Felton releases his 5th solo ‘Topsy Turvy’. As well as doing wonderful solos, Simon is also founder/frontman singer and bass player for Garfield’s Birthday. On this 2017 recording, which is a completion to his ‘therapeutic/confessional collection’, he writes and executes his finest material ever. The first track ‘The Ghost of Christmas Past’, grabs your heart and ears instantly. A mellow semi haunting pop gem, which is followed by ‘Lost and Found’ (trk 2), that reminds me of Peter Lacey’s (another Pink Hedgehog label diamond) jolly sunshine pop, fully adorned with contrast between Beach Boys/Stackridge and a bit of humor. ‘Out of Time’ (trk 3) takes a turn to a heavyheartedness that could be compared to a Korgis hit. Just beautiful.

It would be easy to describe every song but to be direct, the release doesn’t have one single weak moment. Ten songs are perfectly put together, supremely arranged, lovingly performed, and generously given to the lucky listener. Simon’s vocals are honey sweet and addictive. He plays every instrument with one exception by a guest guitarist (trk 9) Steve Wilson (no not the P.T. star), who is from his own band The Steve Wilson Band, later shortened to Wilson ( on Pink Hedgehog label). It should also be mentioned that a part with spoken word at the end the recording (trk 10) is by Stephen John Kalinich.

‘Topsy Turvy’ is full of great hooks and memorable melodies. It’s a feast of gentle marvels that have just the right amount of playfulness, yet balanced with an array of doleful situations that most people face during their lifetime. There is certainly a British Invasion slice of life throughout and sounds as authentic as can be. You might even hear a small bit of classic Herman’s Hermits (trk 7) in ‘Smile For The Camera’. The tunes may be simple but it is the end result, being concise pastel creations with warm moody topics, that make the album so attractive.  Without a doubt one of my favorite pop records of 2017. VERY RECOMMENDED