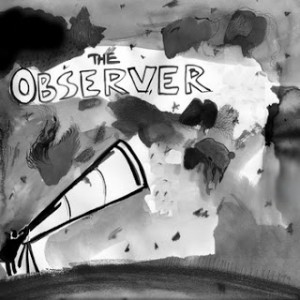 Third release by this fine composer (debut was “Great Wall of Sound” 2006 and sophomore was “Movements” 2008) and his most realized to date. All instrumental (except a poem read in ‘Galen’,  track 10 and this will pass you by quickly if you are paying attention) recording rich with many styles but cinematic in scope and atmosphere.  You’ll find big Middle Eastern influences along with jazz fusion, classical, progressive rock, ambient, and more.  You can imagine a blend of Mike Oldfield, Jean Luc Ponty, and Darryl Way (early solo).

There is a lot to love here.  This could have very well been Oldfield’s following album after “Tubular Bells” and people would think this was monumental.  I found every single moment of “The Observer” interesting, beautiful, broad and brag worthy.  Multi-talented Gunve writes and produces this minor masterpiece as well as performs all guitar, synth programming and electronics.  His cohorts are Tripp Dudley : Tabla and Darbuka, Sean Hagerty : Violin, Joe Renaud : Drums, Raymond Sicam III: Cello,  and Lorenzo Wolff: Bass. The sound and production is much bigger than the lineup would suggest.

I especially like the smart blend of eastern, classical, and folk with lots of distinct tabla as well extensive us of real strings and percussion. The music keeps an epic feel and often soars alternately floating with giant spread wings. The eleven compositions travel, that’s for sure. The last track (“Damini”) clocking in at 10:45 is by far the most ambient but leaves the listener with a gentle landing after such blissful voyages on previous cuts.

To say Gunve is the second coming of Mike Oldfield is tempting but unfair, especially since his first two recordings bear little influence of that artist. No doubt fans of Oldfield will relish “The Observer” and rightly they should. There is plenty more to come which is anyone’s guess as to what direction it may be.  One thing for sure, I will be waiting with open ears.