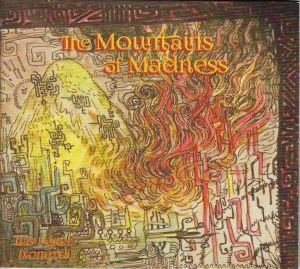 An intimate expansive confluence of old school electronics (inspired by Karlheinz Stockhausen) and deep visionary otherworldly Pre-Columbian music. In his own country he is more famous for being a member of the Mexican folk band Huayucaltia. He has released several solos from 1981 to present, working mainly in the fusion of early Mexican music and electronics. He began the foundations of this recording with a monophonic analog Moog. A microtonal platform was used to create much of the sonic groundwork. Along with this were an array of ancient instruments made from organic material such as  bone, clay, plants, stone, wood and other natural substances.

An intermingle of modern (if you can call an analog Moog modern) and Mesoamerican sounds come together to make ‘The Mountains of Madness’, a wondrous listening experience. Though many old progressors have been exposed to earlier ancient music experimentations from regions of South America such as Jorge Reyes and Humberto Alvarez, Luis Perez is known by some accounts, for being the creator of this fusion of old and new. Perez gives a unique approach on this set of compositions. The results are quite cerebral at times with inclusion of parts of acoustic grand piano used as just the wooden platform which holds the strings, to act as a detuned harp. All to fit in his creation of a microtonal ‘sonorous realm’. Four of the compositions are over 10 minutes, and each piece has mystery, large images for the mind, and a great vacuum that gently pulls the listener into a vortex.

From the opening cut, things go into a bizarre electronic, quasi glitch-distortion probe that would never seem to fit in any ethnic styled album, however, this early electronic era influenced work is only a 5:53 intro called ‘Exodus’. After around 4 minutes it delves into the Pre-Columbian aspect with haunting drift. The following track ‘The Rupture’, a similar arrangement, is made with flighty spurting gyrating electronics ala Moog, and gradual ethnic inclusion after a few moments of mad scientist time. You get a change of order with ‘Dark Valley’ (track 3) which starts off more dreamy and then brings in the more playful Moog. Some abstract use of those organic instruments are used along with the deconstructed grand piano. ‘Underwater Transport’ (track 4) has an eerie atmosphere with cool use of winds such as ocarina, flutes, and sustained stretches of washes and esoteric effects. You can picture a ghost train running through a desert in the night, where a peyote ritual is being performed. Surreal!

The next piece ‘Vortex’ (track 5) takes its time to develop. It is more pronounced with use of an oud at the beginning, along with celestial electronic soundscapes (you could compare to some of Tim Blake’s work with early Clearlight Symphony) and wooden percussion, bubbling synthesizers and roaming piano harp. Lots of pink and white noise is used with Moog filters, and in a unexpected way the ethnic instruments are added. I am quite sure most listeners will be a bit surprised at how ‘The Mountains of Madness’ sounds overall. If you are expecting some kind of Pre-Columbian music ritual with new age electronics then this is NOT that whatsoever. If you want something totally different from anything you already own, in the experimental electronic world with uncommon use of aerophones and idiophones, in addition to eccentric rare objects, then get this.

It often sounds more like a soundtrack to an alien space movie, especially on ‘Mirror WIth a Memory’ ( track 6), and ‘The Descent’ (track7), which due to its sacred male multi layered vocals, sounds very Tibetan Monk-like, or music for out of body travelling. The back cover art says it best. A startling and incomparable release with huge ideas.