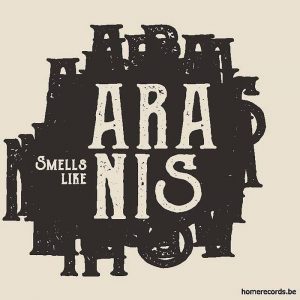 When a band I have put on a throne for their immaculate series of recordings of various original chamber music styles, including avant and cover songs from other Belgian composers, announces they are doing an entire album of cover tunes by Nirvana (the Seattle grunge band of the 90’s), I got a fear in my soul. This brilliant band who could do no wrong really startled me. I will admit right here that I am not at all a fan of Nirvana, with the exception of being okay with the hit song ‘Smells Like Teen Spirit’, since I was young when that hit the stations and it attracted me due to the contrasting mellow parts and then heavy chorus. So with very mixed feelings I began listening to Aranis’s new 2017 release titled ‘Smells Like’.

Fourteen songs are covered in a classical chamber style as Aranis is so famous for. The first few tracks felt commercial for some reason. It was going to take a second listening to warm up to this disc. Thus why I always give every recording I ever review, at least three spins over a spread of a week or two. That way I can never blame a wrong mood, or not giving something a chance. It’s only right. At selection six (‘The Man Who Sold The World’) I was claiming this a success.

The songs flow nicely and although each one is easily recognizable ( this is by no means a total deconstruction) they are also a fine interpretation. If I had any complaint it would be that Aranis played things just a bit too safe, and for some reason stopped well short of really diving in and doing a little hacking of the compositions. I am sure they had their reasons and perhaps it was more of a respect for Nirvana than a selfish desire to turn the music into an avant garde mishmash. From grunge to classical is tough enough as is.

So in the end, while this is my least favorite Aranis release, it is also not a bad record. I have no idea if Nirvana fans will like this, and I am not sure if existing Aranis fans will love this. As a big fan myself, I am okay with it, and feel half of it is excellent. I’d still have preferred a more explored approach to the music. I’m keeping my copy because I do love Aranis and will have something to play if a Nirvana fan ever visits me, to see how they react to it.