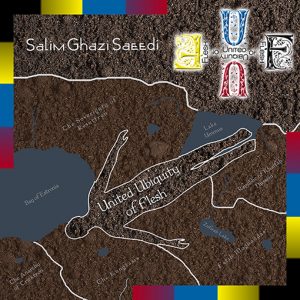 New solo by guitarist/programmer/composer/producer/engineer artist begins gentle and builds into a prog metal/Middle Eastern King Crimson sound. Out of the eleven all instrumental compositions, some have a sense of exploring improvisation. ‘United Ubiquity of Flesh’ is the most calm music I’ve heard from Salim, although there is plenty of punch and quick paced parts mixed in. This is possibly due to his move from Iran to Australia, which seems to have resulted in Salim’s more relaxed state of mind and music. The combination of a more loose feel and tight execution of the songs are compelling and introspective.

Abundant use of phase shifter and subdued effects give the music a mysterious atmosphere. I can hear a slight Robin Trower fused with Jeff Beck/Van Halen influence in some of the lead guitar work, but those seconds give way most often to a chunky prog palette of greats like Richard Pinhas (Heldon fame) and Robert Fripp ( King Crimson ‘Red’ era). The programmed drums sound much more natural this time as well.

This is a concept album (Salim includes some explanation in the physical CD format , with great artwork to go with it) put together very nicely. The careful listener may hear some semi surf music, whether it was slipped in or done subconsciously, only the artist knows. This too is most probably another beneficial impact of living in Australia.

‘United Ubiquity of Flesh’ requires a close and full length listen in order to pick out all the genres going on, which is exactly what makes it a progressive rock production. I give applause to Salim for giving plenty of room to breathe, on this different from anything else he has ever done output. Although I have loved his previous works for the more dark avant rock and sometimes chamber style leanings, I think this newest recording is a turning point for even more diverse music to come.