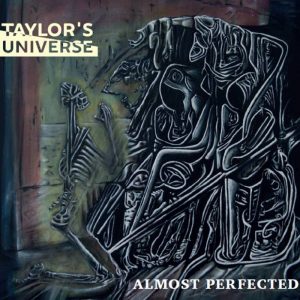 Having heard everything Robin Taylor has released (I personally own all his physical output),  I was curious to what Robin might have done to the songs of yore. I was confused back in 2015 when he released what he called a ‘compilation’ titled ‘Across The Universe’, and I misunderstood what he actually did. He took previous songs he was not totally happy with, and remade them with his new band. This was like a new release, and now he has done the same thing again with even more tunes he wanted to improve. This time it is like an entirely new set of compositions, and an absolute thrill.

‘Almost Perfected’ should have been titled ‘Finally Perfected’ but those long time Taylor fans have always been happy with his projects. I took the approach of just enjoying this CD as it is, and not getting deep into the old versions of songs, where they came from, or how they compared, but I will say this much for anyone interested. The four compositions are not only extended, but fully remade and retitled. Two are from his Robin Taylor ‘Isle Of Black’ (2007) (which had Karsten Vogel on sax, Rasmus Groselll on drums, and of course Louise Nipper performing voice, with Robin Taylor playing guitar, bass, keys, and percussion). The two songs there are ‘Johannesburg’ and ‘Mind Archaeology’ (a very different name from ‘Dark Side of Alec’, on his new edition) , then you have the other two titles from ‘Soundwall’ (2008) by Taylor’s Universe with Denner (this album featured Michael Denner – electric & acoustic guitars, power twin solos [right channel], Karsten Vogel – soprano, alto & tenor saxes, Robin Taylor – guitars [thrash solos], bass guitar, piano, organ, tron, synths, stringman, toy keyboard, glockenspiel, percussion, voice, tapes, & treatments, Rasmus Grosell – drums, with Louise Nipper – voice , and Victoria Bjerre – the little voice on ‘Aspx’). Those tracks are ‘Tag Attack’ and ‘Totally Greek’. So you can see the renaming. But the focus should be on his new creations.

Anyone who has loved the last half dozen Taylor releases (especially noted would be ‘From Scratch’, ‘Evidence’, ‘Worn Out’, ‘Kind of Red’ and ‘Two-Pack’) will surely want this newest one. The formula that the band creates, under Taylor’s wand, is the best thing he has ever done, in my opinion. And that is hard to say, due to so many great predecessors. With lots of soaring guitar leads, pleasing sax solos, Fripp-like rhythms, and skilled dynamics, ‘Almost Perfected’ is a all out winner. The first track ‘Mean Attack’ (11:42) gives you all of the above, plus a sudden break that moves on with beautiful flute, keys, and buildup using The Taylorettes (Louise Nipper and Jytte Lindberg on voice). Track two ‘Definitely Greek (He Said)’ (10:48) begins gently with piano, acoustic guitar, synthesizer washes, and perfectly done drums. Then soft moog, fretless bass, and the layers start to lift you off your feet. Add the Taylorettes, who sound like the singers from Philip Glass’s ‘North Star’ and the surprise comes midway through, an explosion of sound, only to quickly settle back down and prepare for the remaining epic stages. Yes-like (on their ‘Tales of the Topographic Oceans’ glory days) with substantial changes, textures, and spot on beautiful complexity. Once again, one of the best songs Robin Taylor has ever done.

Track three ‘Remembering Johannesburg’ (9:23) is another super melodic groove soaked piece. Beautiful! It reminds me of a song that could be off Soft Machine ‘Softs’, with it’s cadence style John Marshall drums along with smooth sax, flowing dreaminess, and more astral lead guitar soloing, alternating with moog lead. The longest and last track of the disc ‘Dark Side of Alec’ (14:27) starts off the heaviest and most aggressive. Although it pulls back into a planning stage right away, you can hear the development coming. And it certainly does unfold to a delight. Somewhat Pink Floydish at times, but still has a distinct Jan Garbarek sound in his world jazz rock stylings (‘In Praise of Dreams’, ‘Twelve Moons’). Rich, gorgeous, thought provoking, with an atmosphere to die for. This is four for four, all 100% prime music.

Robin has a nice message inside the digipak fold open cover. He states that over the years you get better. Is he ever correct about that. He also explains how the recording came about. When I talked to him, he told me he was very happy with this CD. Knowing Robin over the years, I know how he has toiled and often made himself ill over worry and work with his projects. He is a perfectionist who may never be 100% satisfied with his compositions but with ‘Almost Perfected’ he told me if this was his last release, he could be happy about it. In my opinion this is a pinnacle of Taylor’s career. And I can truly recommend this to all. GREAT CD!!!!!