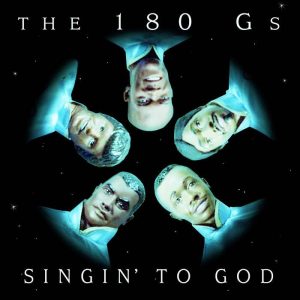 With unlimited skill and patience, David Minnick, the man who created this imaginary a capella vocal group The 180 Gs (the name came from a composition from the band Negativland, called ‘A Big 10-8 Place – Part 2’) tackles the double disc music of Cardiacs ‘Sing To God’ (a 1995 stunner that many fans feel is their ultimate offering). The result is a feat nearly impossible to conceive, using anywhere from one hundred or more overdubs on each track, to generate this massive undertaking. To envision the music, try and think of a modern esoteric choir, also using occasional hand claps, various body parts for percussion effects, voice and body for bass and even guitar parts, along with some found sound effects, to perform Minnick’s interpretations (although a Cardiac devotee will hear all the details from Tim Smith and company’s more than complex brand of punk, progressive, and art pop).

All 22 songs gallop with a triple crown, full of abundant lushness, ripe with energy, tenacious arrangements, with nearly unreal accomplishment. David Minnick, from Michigan, has a long history in the music world that includes experimental projects using phone message machines, genre hopping bands (The Sursiks) to free jazz (Zermos) and too many more credits to list in one review. He is no stranger to this colossal overdubbing of voices and effects. Previous to ‘Singin’ To God’ he took his The 180 Gs conception and did a recreation of some of Negativland’s media collage pieces with the idea of creating a more musical set of arrangements. Like the reverse of what Negativland had done originally. Over a two year period, Minnick had it finished. Although some roadblocks, ‘180 dGs to the Future’ was finally officially released in 2008. ‘Singin’ To God’ took him four years to make (starting in 2011) and for all the world to receive this gift, in 2018 it is now available as download or a limited edition 2 CD set on Bandcamp. Note that one half the sales of it will go to Tim Smith fund, for his medical care.

For music lovers not familiar with Cardiacs (a brilliant UK group of rogues who have spawned a tremendous number of offshoots, side projects, and stunningly great bands under their inspiration and influence), this release would be a very nice way to get your feet wet. Technical, elaborate, and compounded with oddity, this masterpiece which was produced, recorded, and mixed by Minnick (who also did all of The 180 Gs sounds and voices, as well as arranged them), is a vibrant adventure for the ears and brain.

Word is out that Minnick has already completed yet another larger than life project with The 180 Gs doing an a capella cover of The Residents ‘Commercial Album’, to be released in either late 2018 or early 2019, on Klanggallerie Records. As for now, ‘Singin’ To God’ is here to make its mark on musical history.