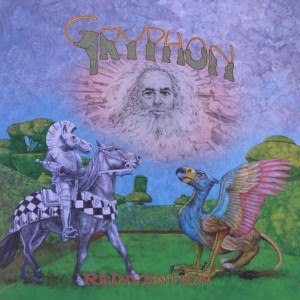 An ear to ear smile formed on my face when I first saw that an old favorite band of mine were putting out a new album, after 41 years of void. It should be noted that ‘Midnight Mushrooms’ was a favorite Gryphon release for me, until now that is. 2018’s masterful and warm welcome comeback ‘Reinvention’ tickles every music adoring bone in my body. At over 61 minutes it brings a little bit of almost every stage of the band’s career back, minus any trace of ‘Treason’, which was their dive into a slightly commercial progressive rock arena, which put multiple vocal harmonies like Yes up front.

Admittedly, I thought I would miss Richard Harvey’s presence, but I do not. After all, three of the original members are still here, being Brian Gulland – bassoon, bass crumhorn, baritone sax, piano, recorders, and vocalizations/ Graeme Taylor – acoustic and electric guitars (he also produces the album)/ and Dave Oberle – drums, percussion and vocals.  The rest of the members are Graham Preskett – violin, mandolin, keyboards, harmonica/ Andrew Findon – flute, piccolo, fife, soprano crumhorn, soprano sax, clarinet/ and Rory McFarlane – electric & double basses. The original members wrote several jewels fit for a king and new members Graham Preskett and Rory McFarlane have contributed delightful gemstones as well. In fact, golden nuggets of progressive rock, folk, jazz, circus music and even boogie, sneak into parts of some compositions, which breathe new air into the broad palette of what the classic Gryphon had already proven to be so great at.

The vocals by Oberle on a few tunes has a variation from proper English to Canterbury styled (think Richard Sinclair) buttery flavor. And new member Andy Findon is truly a fine artist, who is one of the big reasons I do not miss Richard Harvey. Hats off to everyone for making this a grand success. Gulland begins the album with ‘PipeUp Downsland DerryDellDanka’ and ends with ‘The Euphrates Connection’. Both strong and deeply moving, the last track being especially stately with melancholy beauty. There is still a firm base of early music, but along with, either injected inside, or cleverly integrated, are moments that Stackridge lovers can sink their teeth into. That and all the aforementioned styles plus more. With such an array of instruments played among the six musicians, the gentle bending is constant. However, with distinct flute, piccolo, krumhorn and bassoon always popping up, the other instruments-a-plenty are allowed all sorts of avenues to play in. A few displays with new technology effects don’t hurt for unique adventure either.

‘Bathsheba’ (track 8) is among all the many standouts. ‘Sailor V’ (track 9) begins as a folk aire of beauty developing into quite a big scale piece of 8:35 minutes. The longest work is ‘Haddocks’ Eyes’ (track 4) just under 11 minutes, and in epic form. Eleven compositions filled with everything wonderful and nothing of waste, make for a thrilling listening experience. In short, ‘Reinvention’ is everything you loved about the original 1970’s Gryphon and much more. The balance of serious and tongue in cheek is perfect, and this shows the group to be fully engaged, ready to show the world that they still have plenty to share. A future release would be a dream. HIGHLY RECOMMENDED.