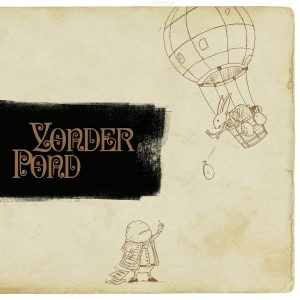 A second solo (self release) by Remy Stauli of Switzerland, who has spent many years in the music scene with various bands ranging from Zappa cover group (Fido Plays Zappa) to avant jazz rock (older avant prog lovers may recall Spaltklang and Yolk). On Remy’s first solo (‘The Elf Album’ – 1997) he released it under his actual name. It was a much overlooked masterpiece of early Canterbury delight, with vocals, keys, drums, guitar, all done by him, and a hair more aggressive than this Yonder Pond project, 20 years later. He describes ‘Pondering Aloud’ as progressive rock, which was/is his first love.

This new solo has a somewhat Supersister sound, with equal parts early Caravan. So not too different than his first in overall style. The Canterbury sound is certainly present. Not to scare off progressive rock fans but 9 out of the 10 songs are under 6 minutes, and some of those are around the 3 minute region. The last track is almost 10 1/2 minutes and will make many people very happy. This early 70s style is cheerful, slightly quirky, and eccentric. It is infectious, even if nostalgic, and is so full of an atmosphere we just don’t get these days.

Remy invented the trio mentioned in the credits (Emyr Taurelis, Rembrandt Van Der Straal, and Remily Lane). A play on names and puzzle of letters make up Yonder Pond with the important exception of some real guest musicians (Pascal Grunenfelder – bass, Stef Strittmatter – guitars and sitars, Markus Stauss – flute, Beat Burkhard – sounds, & Flavio Gallacchi – handclaps). The liberal use of flute, which flutters over many of the songs like a colorful butterfly of Canterbury ghosts, is secure in keeping the music light at heart. Of course the drum work is exact and just right, never overplayed. Except for the vocals (by Remy) that have a distinct sound that although not a mimic of anyone else, ‘Pondering Aloud’ could be a long lost R. J. Stips album, or unreleased Supersister platter.

Everything is exceedingly pleasant and well done, with some brilliant moments that grab you hard. Lots of memorable lines and great use of piano, mellotron, chorus, and hooks. No question that tracks like ‘Who Do They Think They Are’ (track 9) will be a classic, with its extra percussion, twists and unforgettable tag line. That is right before the only long song, which between the two, is worth the price alone. ‘Everyone Is Banging The Drums’ (track 10) is fantastic, with all the earmarks of an epic Canterbury jewel. Everything about it is perfect. Anything and everything a Supersister lover could want. ‘Pondering Aloud’ will be a nice surprise for many. No avant music, just cool Canterbury style with all the trappings that make that genre so appealing and insatiable to all with good taste. RECOMMENDED.